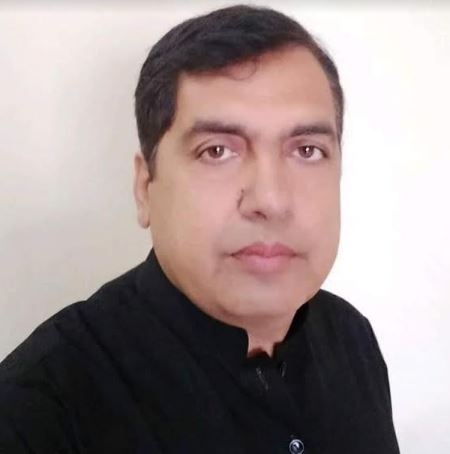 Whenever and wherever forest fires broke out in Punjab, Sindh, KP, Balochistan, AJK, Gilgit-Baltistan and without waiting for the inquiry report, some people issue statements stating that forest fires were started by forest employees. To say that forest department employees themselves start forest fires. So all such statements are completely wrong and have nothing to do with reality. Such statements cause distress and mental anguish to the families of the martyrs and the injured during the firefighting.

Who would be so foolish as to set fire to the forest first and then be martyred or injured while extinguishing the fire? Such statements cause distress and mental anguish to the families of the martyrs and the injured during the firefighting. I have been writing reports on the forest department for the last 20 years and I have visited the forest several times.

No authentic news has ever been found in which it is suspected that forest department employees have started a forest fire. Baseless and false news is spread against the forest department by those who have no knowledge of forests. There has also been a flood of junk posts and comments on social media regarding forest fires. And some people are irresponsibly sharing and retweeting false news. Pakistan is the eighth most vulnerable country to extreme weather caused by climate change, according to the Global Climate Risk Index compiled by NGO Germanwatch.But experts say there is a lack of awareness among the population about environmental issues.Forest fires are common from mid-April through to the end of July, caused by searing temperatures and lightning as well as slash-and-burn farming. Tourists who come for sightseeing also cause forest fires.

Most tourists leave the fire burning after cooking or making tea. This small mistake of a tourist turns a huge forest into a heap of ashes. Livestock is a major source of income for the community living around forests. All livestock grazing areas are forests. According to the local community, new grass will not grow unless existing grass is set on fire. When the local community sets fire to last year’s grass.

Dry grass fires are so intense that they spread to large areas of forest. Mischief and enmity are also the cause of forest fires. Now it has become a situation that TikTok star  Noshin Syed proudly posted a clip of walking with an open heart in a silver ball gown in front of the burning hill of Islamabad with the caption: “Fire burns wherever I am. Lack of consciousness and ignorance is the last limit. There are three types of forest fires: ground fire, surface fire and crown fire.A ground fire is a type of wildfire that occurs in the subsurface where fuels such as peat, coal, tree roots, and other buried organic matter ignite and burn under the ground. Depending on the conditions of the fire, ground fires may eventually burn through the surface of the ground and become surface fires.Because ground fires exist below the surface of the ground, they are typically more challenging to contain than surface fires. That said, these subterranean fires spread more slowly than surface fires and may burn over the course of several months. A surface fire refers to a fire that ranges from low to high intensity depending on the conditions. Aptly named, such fires burn on the surface of the ground and are primarily fueled by low-lying vegetation such as twigs or dried leaves. These fires develop from ground fires that grew enough to breach the surface. While they may scorch a tree canopy, they will not cause it to burn enough to carry a fire. Surface fires often spread slowly, but can begin to spread rapidly when they occur in an area that has a steeply sloped landscape or are pushed by wind. That said, most surface fires ultimately die out before they are able to develop into the next level of classification: crown fires. Another different type of wildland fire is a crown fire. These fires burn and spread from treetop to treetop—also known as the crown or canopy of trees. Unlike ground or surface fires, which spread more slowly, crown fires spread at a rapid pace. As such, crown fires generally advance well ahead of a lower-level fire.The rapid pace of crown fires is largely due to their height, which exposes them to wind. Such wind pushes the flames and sparks from the fire into a potentially interconnected or continuous tree canopy. Due to the quick speed at which crown fires can spread, they often turn into extremely intense fires.To ensure you are ready to face any type of wildfire that occurs, shop the extensive collection of wildland fire gear for sale at the Supply Cache. From hand-made boots to fire line tools, we have everything you need to stay safe in any type of fire event. If forest fires are to be brought under control quickly, better equipment and training of forest personnel in all four provinces, AJK and GB.The government will have to take immediate steps to strengthen the capacity of wildlife board forest guards and firefighters. The government should immediately approve special firefighting vehicles that can reach difficult areas. Purchase firefighting gear (uniforms, boots, helmets) and equipment for the staff as well as use of  drones for fire detection. The government will have to carry out long-term planning and measures instead of short-term planning. Awareness campaigns should be launched in all four provinces, AJK and GB, on the importance of forests to the public and forest fires.