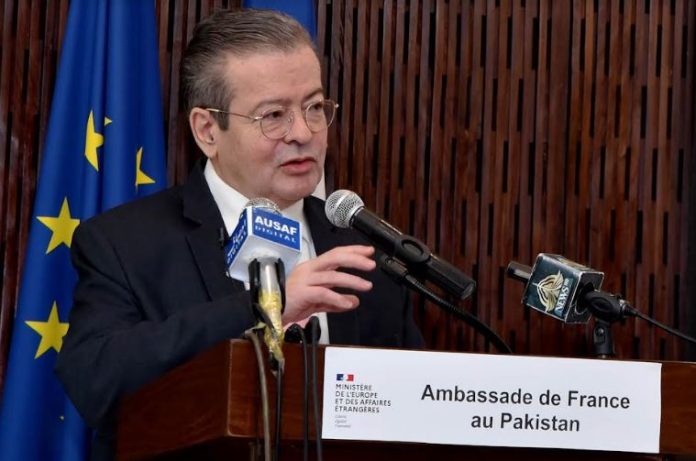 ISLAMABAD: Ambassador of France Nicolas Galey has said following the unprecedented floods that hit Pakistan, the President of the French Republic, Emmanuel Macron, wished to mark the solidarity of France and the French people with the people of Pakistan.

In consultation with the Pakistani authorities, France quickly dispatched emergency equipment and military experts from the French civil security service to the field to assist in relief operation and respond to urgent humanitarian needs.

Ambassador Galey expressed these views while addressing a press conference along with the French Defence Attache Col. A Presson.

The ambassador further said, on September 3, a special chartered flight arrived in Karachi, carrying emergency equipment (including 83 high-capacity water pumps and more than 200 tents, as well as other non-food items) and a military medical team consisting of 4 doctors and 4 nurses, as well as a military team of 4 technicians to operate the water pumps. The French medical team remained on the ground for two weeks in Badin district in Sindh, working alongside their Pakistani colleagues from the Badin military hospital, to provide hundreds of medical consultations each day. As for the team of trainers, it was able to train more than 50 Pakistani technicians in the use of water pumps.

He said, from October 7 to November 5, 40 French civil security experts were deployed in Dadu district in Sindh to operate water purification equipment brought directly from France. The military team provided 600.000 liters of drinking water to the local communities (1.000 beneficiaries/day).

As an indication of support towards the reconstruction of flood-affected areas, France provided a 50-meter-long Bailey-type bridge that will soon be deployed by the Pakistani authorities in Sindh district, he added.

These operations were being carried out within the framework of the European Union Civil Protection Mechanism (EUCPM).

In a further expression of support to flood-affected communities, France allocated 1 million EUR to three French International Non-Governmental Organizations (INGOs) for relief operations for a total of 90.000 beneficiaries in 3 provinces:

• Action Against Hunger (ACF) for an integrated project combining health, water, sanitation and hygiene (WASH), agriculture, food security and livelihood for close to 30.000 beneficiaries in the districts of Kambar Shadadkot and Khairpur in Sindh;

• Secours Islamique France (SIF) for a multi-sectoral emergency assistance to 40.000 beneficiaries in the districts of Quetta, Killa Saifullah, Pishin and Lasbela, in Balochistan;

• Médecins du Monde (MDM) for the deployment of three mobile health teams, for 20.000 beneficiaries, in Khyber Pakhtunkhwa (districts of Nowshera, Charsadda and Chitral).

He added, the French government has also allocated 1 million euros to the World Food Programme (WFP) for an integrated Nutrition – Safety Net Programme for pregnant and lactating women in the districts of Qambar Shahdadkot and Khairpur in Sindh. This programme will provide emergency food assistance, life-saving nutrition preventive packages, and cash grants to 5.400 direct beneficiaries, and 32.400 household members.

Finally, beyond public assistance, a number of French companies also contributed to support flood stricken communities [Total, Bureau Veritas and others] through direct donations or contributions to non-profit organisations to provide immediate support to rehabilitation activities, the ambassador concluded.