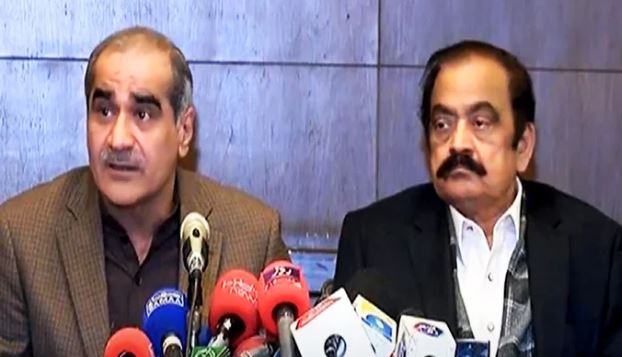 “They should sit with us for unconditional negotiations,” said Minister for Railways Khawaja Saad Rafique addressing a joint press conference with Federal Minister for Interior Rana Sanaullah.

The former prime minister, who has been demanding elections since his ouster through a no-confidence motion in April, invited the PDM-led government to talk over the possibility of early polls and warned that around 66% of Pakistan would have to vote for by-polls if the government in Punjab and Khyber Pakhtunkhwa dissolved the assemblies.

“It’s them (PTI), who need talks not us. They start the talk of talks and then shy away from even talking about it,” said Rafique.

The minister further stated the government’s allies had severe concerns about holding talks with PTI.

He said that the government would hold unofficial talks with PTI but the party was told that the PDM would be the one to decide if they wanted a dialogue.

Meanwhile, the interior minister warned Imran Khan against offering talks with a threat as his behaviour hasn’t been appropriate in the past.

“He [Khan] will not get anything due to his threatening behaviour,” Sanaullah said

Earlier today, Sanaullah while talking to the media had said that in politics, one has to work together because no progress can be made without talks and negotiations.

He, however, said that the ruling coalition has no backdoor links with Elahi and it will be publicised if there are any talks with the PML-Q leader.

Moving on, Saad Rafique said it was Imran Khan, who mocked Shehbaz Sharif’s charter of the economy.

He was the first prime minister who used to skip seats to come to the Parliament so as not to meet the opposition, the railway minister said.