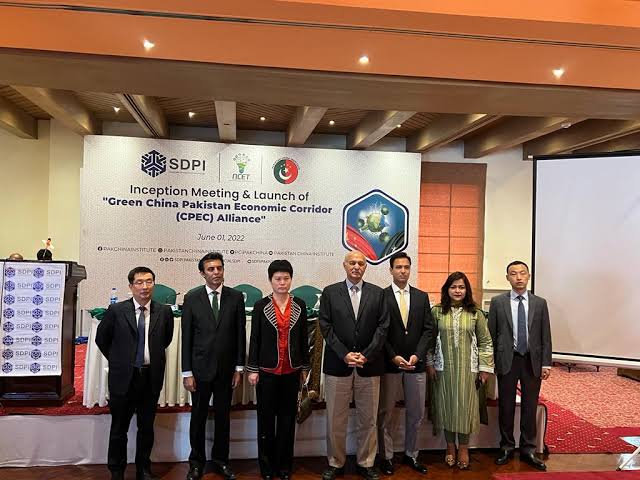 Senator Mushahid Husain Sayed in his opening remarks said that Pakistan took a number of initiatives from the 10 billion tsunami tree to the commitment that 30% of the country’s energy by 2030 would be renewable energy.

“So it is important to understand when we talk of the greening of CPEC, that this is not an issue confined to governments of Pakistan and China but this initiative has to be people centric, and driven by public opinion,” he added.

Ms Pang said that CPEC is an important pilot project of BRI and in April 2015, President Xi Jinping paid a historic visit to Pakistan, opening a new chapter in the construction of CPEC.

With the efforts of both countries, “CPEC is steadily moving towards high-quality development; ​the energy sector is one of the fastest and the most fruitful areas of cooperation under the framework of CPEC; green energy projects such as hydropower and solar power have always been the focus of cooperation between China and Pakistan, “said Ms Pang, adding that the cooperation in green energy has been continuously strengthened in recent years.

Mustafa Hyder Sayed, Executive Director PCI, while presenting the idea of the “Green CPEC alliance” with SDPI said, “Post-Glasgow Cop26, this is an opportune time to engage all stakeholders to a greener CPEC”.

Mr. Zhang Jun, Chairman of China Three Gorges Corporation said, “We aim to provide clean and green energy to Pakistan under CPEC, which is a green initiative”. He said, “stable, clean and cheaper electricity is the most important three features of our investment in Pakistan.”

Muhammad Aurangzeb, CEO, Habib Bank Limited said that as the largest bank in Pakistan they made a public commitment to reaching net zero in 2030. “We will continue to step up all sectors of CPEC; we have opened a branch in Rashakai. We are thankful to China for letting us open a branch in Beijing. We are proud of our association with China,”he said.

Dr Abid Qaiyum Suleri, Executive Director at SDPI, said that China was one of the countries that helped many developing countries during COVID, including Pakistan adding that a greener CPEC will ensure a greener and brighter future for Pakistan.​