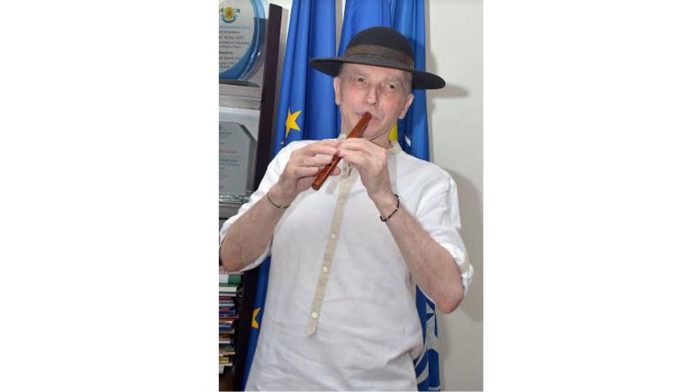 ISLAMABAD: Renowned and iconic Romania musician, artist singer and performer Grigore Lese has said Pakistan has a rich musical and cultural heritage that needs to be preserved and projected in its true spirit. He added, Pakistani music should not be mixed with the Western or any other music in order to retain its originality.

Grigore Lese expressed these views while giving an exclusive interview to Daily Islamabad and Centreline magazine. The full text of the interview shall be published in the July edition of Centreline. Ambassador of Romania Nicoale Goia facilitated the interview.

Grigore Lese talked in length about the kind of music he was composing. During his recent visit to Pakistan he participated in number concerts in Islamabad and Lahore. During the visit, he found many similarities between the Romanian and Pakistani music.

Leşe was born in 1954 in Stoiceni village, Maramureș County in northern Romania. He graduated from the Music College in Baia Mare, followed by the Music Academy in Cluj.

In 2003 he received a Ph.D. in music, with the thesis Horea în grumaz. Considerații teoretice și practice ale interpretării genului dintr-o perspectivă stilistică. From 2005 he was an associated teacher of ethnomusicology at the University of Bucharest. One year later, in 2006, he started doing shows for the public national radio and the public national television, for which he was awarded with national and international prizes in journalism.

In 2007 Grigore Lese received the great prize of the Romanian Association of Television Professionals (APTR), in 2009 the prize for cultural journalism awarded by Radio Romania, and in 2009 he was nominated at the International Shanghai Film and Television Festival.

Leșe is the first Romanian musician that brought with him on the stage traditional artists from other cultures and countries such as Iran, Syria, and Pakistan, with the purpose of demonstrating the relationship between old music in Romania and the East.

His music was selected for several feature films and documentaries from Romania and other countries, such as The Pharaoh, Gunpowder, Treason and Plot (a BBC production), and Wild Carpathia ( a Travel Channel production).He was invited to perform worldwide at festivals in Washington, D.C., Bloomington, Paris, Berlin, Athens, Montreal, Basel, Morelia, Frankfurt, and London.

When asked to share his experience of giving music to well-known international movies, he said ostensibly it was a great experience. He said today people try to become stars overnight, which is not a professional approach. A good artist always banks upon his or her works and takes pride in his professionalism.

He said when he woke up in the morning he heard sound of the Azaan(prayers) and he suddenly felt as if he were in an old traditional town of Romania with his elders.

He stressed exchange of artists between Romania and Pakistan adding he was ready to host Pakistani artists in Romania. “If they come to Romania, I will certainly arrange for them performances and interaction with the Romanians counterparts”, he added.

He said a good artist speaks through his works. He said host would greet you from your looks  but will give you something to eat once you speak out your mind. Grigore Lese offered his services to the Pakistani people and especially those who want to learn music. He was he was ready to even to give lectures to music students.