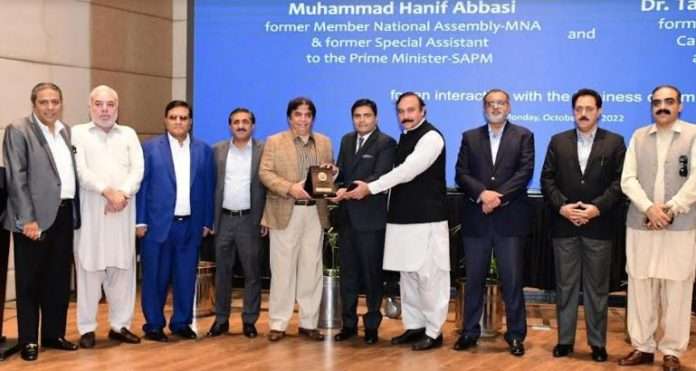 Addressing the business community, Hanif Abbasi and Dr. Fazal Tariq Chaudhry assured that they would fully support ICCI in its efforts for the establishment of a new industrial zone and representation of sitting President ICCI in CDA Board. They said that 11 new routes for Islamabad have been finalized and very soon the citizens would see electric businesses on the roads of the Capital that would provide quality transport and reduce 50% traffic flow. They said that all dead development projects of the twin cities including Bara Kahu Bypass and Rawal Road Interchange have been revived to address traffic issues and facilitate the growth of business activities. They further assured that they would cooperate in addressing all highlighted issues including expediting work on IJP Road and de-sealing of Centaurus Mall. They also asked the business community to cooperate with the government for providing relief to the flood affectees.

Senator Ahmed Khan also stressed that the government should cooperate with ICCI in materialization of the industrial zone project and representation in the CDA Board.

In his welcome address, Ahsan Zafar Bakhtawari, President, Islamabad Chamber of Commerce & Industry said that ICCI has been making efforts since long for the establishment of a new industrial zone in the region to boost industrialization and representation of sitting President in CDA Board to safeguard the interests of business community and requested that both politicians should cooperate with ICCI in these important initiatives. He stressed that the Capital should be made a protests free city and a separate venue may be earmarked for such political activities to save the businesses from any losses. He said that the DC rates for land prices have been hiked by 400-500 percent due to which the business of real estate sector was suffering and emphasized that these rates should be rationalized to facilitate the growth of business activities. He said that work on IJP road may be expedited to save businesses and commuters from problems and a parking plaza in every major market in Capital may be built to address the parking issues.

Azhar ul Islam Zafar, Vice President, ICCI said that the closure of Centaurus Mall has rendered about 4000 persons unemployed and around 300 families have been made homeless and requested that both politicians should cooperate in resolving this issue amicably.

Zafar Bakhtawari, former President ICCI presented a cheque of Rupees one million to Hanif Abbasi for the relief of flood affectees.