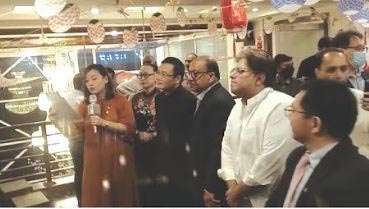 LAHORE, OCT 17 /DNA/ – To understand China and its true manner is possible by understand Chinese thousands years old rich culture which is not only informative but educative and having rich civilization China is proud on its history, cultural heritages.

Chinese Consul General Mr. Zhao Shiren while speaking mentioned that Chinese Province Shandong is at eastern side on Yellow river and known for its Taoist and world famous Confucian heritages. Having one of the China peaks Taishan feature shrines and stone tables and pilgrimages trails.

Showcasing Shandong China here today will help to understand one of the oldest culturally rich civilization of China which is very important to learn from their experiences in various walks of like during their tenures. World renowned Confucian wisdom and already know presently across globe and we are proudly inviting people to see and to learn from these.

The Chinese Deputy Consul General Mr. Cao Ke while explaining about the initiative said that Shandong has played a major role in Chinese history since the beginning of Chinese civilization It has served as a pivotal cultural.

PCSCC Vice President Ms. Cheng Xiaonong while welcome the distinguished guests explained that while showcasing Shandong China for the first time here in Pakistan Lahore starting from Qilu Culture of China which refers to the Qi & Lu which will help the peoples to understand China.

Mr. P.J. Mir & Syed Ali Nawaz Gilani also briefly spoke on the occasion and appreciate the initiative taken by PCSCC and wish them success in their endowers.