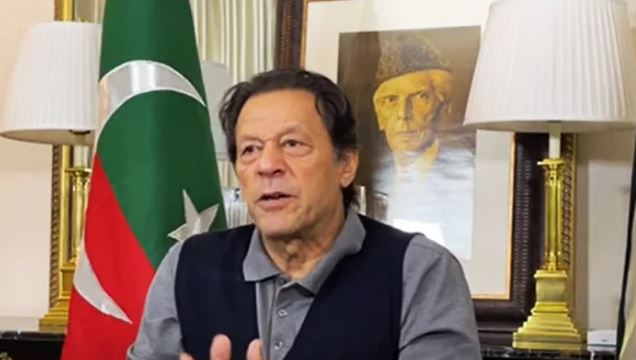 LAHORE, DEC 3: Former prime minister Imran Khan said on Saturday that he had hoped the new military leadership would have “immediately disassociated” itself from the eight months of the previous army chief’s “action against the PTI” as he criticised the arrest of party Senator Azam Swati.

Swati was arrested by the Federal Investigation Agency (FIA) on November 27 — for the second time in less than two months — over a “highly obnoxious campaign of intimidating tweets […] against state institutions”.

Separate first information reports (FIRs) were registered against the PTI leader in Balochistan and Sindh as well for using “derogatory language” and “provoking the people against the army”.

On Friday, Swati was shifted to Quetta aboard a special flight amid tight security after the judicial magistrate of Islamabad handed over his custody to the Balochistan police. From the Quetta airport, he was taken to an unknown place.

Condemning the “vindictive” treatment of the senator in a series of tweets today, Imran asked: “The entire nation is shocked at the vindictive cruelty Senator Azam Swati is being subjected to and for what crime? For intemperate language and asking questions which is the right of anyone in a democracy?” The PTI chief said that internationally, Pakistan and especially “our military is being perceived increasingly negatively because the present imported government is seen as a mere puppet government”.

“One had hoped the new military leadership would have immediately disassociated from the 8 months of Bajwa’s fascist actions against PTI, the media and critical journalists.”

Imran demanded that Swati — who he said was a heart patient — should be immediately released. “Not only because he has committed no crime to deserve this mental and physical torture, but also because this petulant and vengeful targeting is undermining our military’s credibility which is critical for a strong Pakistan,” the former premier added.

Imran warns to ‘go after’ those behind Swati’s arrest

Separately, in an address to the Parliamentary Party of Khyber Pakhtunkhwa, Imran warned that “if something happens to Swati, we will go after everyone responsible for arresting him”.

He said that what happened with the PTI senator was the highest level of oppression. “What was his fault? All he did was tweet […] and he was tortured for that.

“He was first beaten up in front of his grandchildren and then, on orders of Dirty Harry, he was stripped naked and tortured,” the PTI chief claimed, saying that any person would be angry if such a treatment was meted out at them.

“And this anger would only increase if an objectionable video of yours was leaked […] one would only think about taking revenge.”

Imran further said that the people who took Swati to Quetta had turned Pakistan’s justice system into “a joke”.

“I am once again saying this with great respect to the judiciary […] if you won’t protect the rights [of people] then who will?”

Imran then instructed all his party members and supporters to come out in protest for Swati. “Come out […] because this can happen to anyone in the country.”

‘Will dissolve assemblies this month’

Moreover, Imran asked party workers to prepare for elections and begin campaigning in their constituencies. “Whether they [the government] come into elections or not […] we will be dissolving the assemblies this month and moving towards elections.”

He reiterated that PTI was only ready to talk to the coalition leader on elections, warning that he would otherwise dissolve the assemblies where his party was in power.

“Pervez Elahi has given me a go-ahead. He has said he is standing with me and would dissolve assemblies on the call.”

Imran told party parliamentarians that PDM member parties were afraid of going to polls, knowing that the country was facing the worst-ever economic crisis and the masses would not vote for them.

He said the coalition government’s roadmap had been reduced to registering cases against PTI leaders, getting him disqualified and arresting him as already indicated by PPP leader Asif Ali Zardari, harassing PTI workers, and getting their own corruption cases closed.

The former premier added that the country needed urgent elections so that political stability be ensured and businesses, investors, as well as the outer world, could regain trust to work with Pakistan and boom its economy.