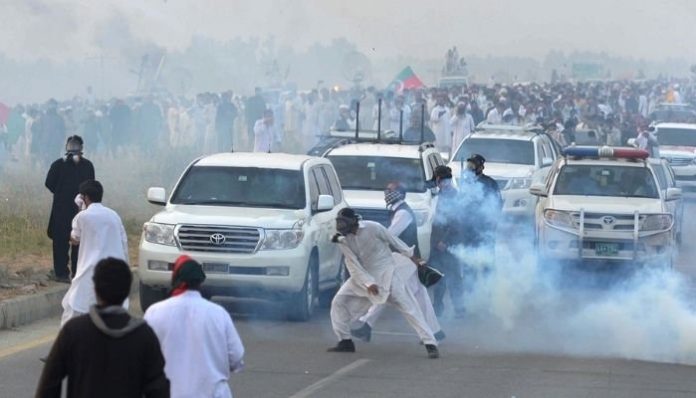 In the last 40 years, Pakistan’s federal capital city, Islamabad, has witnessed many long marches and dharnas (sit-ins) by religious and sectarian groups and political parties. Every single time the city is shut down, and the people of Islamabad suffer the most.

Ironically, we are told that these demonstrations are being held for the people and their rights, when in reality these same people are held hostage. This is not just the case in the capital but also in other urban centres of the country such as Lahore, Karachi and Peshawar, amongst others.

Most of the time protestors in Islamabad converge onto the D-Chowk, opposite the Parliament House. At one time, this site was used for the Pakistan Day parade held every March 23. But today, it has come to symbolize the 126-days dharna of Imran Khan in 2014.

Khan was headed to the D-Chowk again this month, but turned back at the last moment. He promises to return by next Tuesday with a larger crowd.

Interestingly, the federal capital was designed by military dictator Ayub Khan to keep the new city close to the Pindi boys. Maybe the Pindi boys did not realize then what a strategic and security headache the city would be in the future, as it becomes the centre of all political activities inside and outside the parliament.

Asrar Ahmad, a well-known Islamabad-based journalist, wrote in his book titled, Walls Have Ears, that the shifting of the capital from Karachi to Islamabad was a politically wrong move.

“Ayub [Khan] must have felt proud of bringing the new capital close to kissing distance from his home village Rehana in Haripur,” Ahmad noted, “But the future will give a verdict on whether he did something beneficial or ruinous.”

Perhaps Khan thought that he would remain the ruler for several years and keep politics under control. This could be one reason why instead of Gadap, Balochistan, which was also suggested as a site for the capital, as it was above sea level, not prone to earthquakes and close to the former capital Karachi, he picked Islamabad.

At the time, the shifting of the capital was opposed particularly by the then-Bengali leadership, especially former prime minister Hussain Shaheed Suhrawardy, who suggested that if not Karachi then Dhaka should be the new federal capital.

The decision to have a capital with a twin, Rawalpindi, also gave birth to the twin politics of civil-military relations and the one-page or two-page concept.

Now, Islamabad did not always have a bad reputation. After the Iranian revolution in 1979, and the first Afghan war, Islamabad started to become more and more unsafe.

It witnessed its first dharna in July, 1980, when a three-day large sit-in by the Tehreek-e-Nifaz-e-Fiqh-e-Jafria (TNFJ), a sectarian outfit, camped in the city. The protest was against military dictator, General Zia ul Haq enacting the Zakat and Usher Ordinance. The issue was later resolved after talks between the TNFJ leadership with Zia.

But the sit-in laid the foundation of a new style of politics in the capital city.

In the last three decades, Islamabad has also experienced some of the most devastating terrorist attacks and tragic incidents, including events like Ojhri Camp, the attack on the Egyptian Embassy, the Lal masjid massacre, the Marriott Hotel suicide bombing, and many others.

Which is why in recent years, governments have spent hefty amounts to roll out the “Safe City Projects”. Yet, these projects have done little to inspire confidence in the city’s residents.

After shifting the capital to the hilly-Islamabad, Pakistan, it seems, dumped its former capital, Karachi, which was previously known as the Quaid city. In the last six decades, Karachi turned into a slum city with nearly 8,000 katchi abadis (slums).

No one today it ready to take ownership of Karachi, which has become prone to all kind of crimes from terrorism to street crimes and has areas where drug mafias run freely with the approval of the police, politicians and powerful quarters.