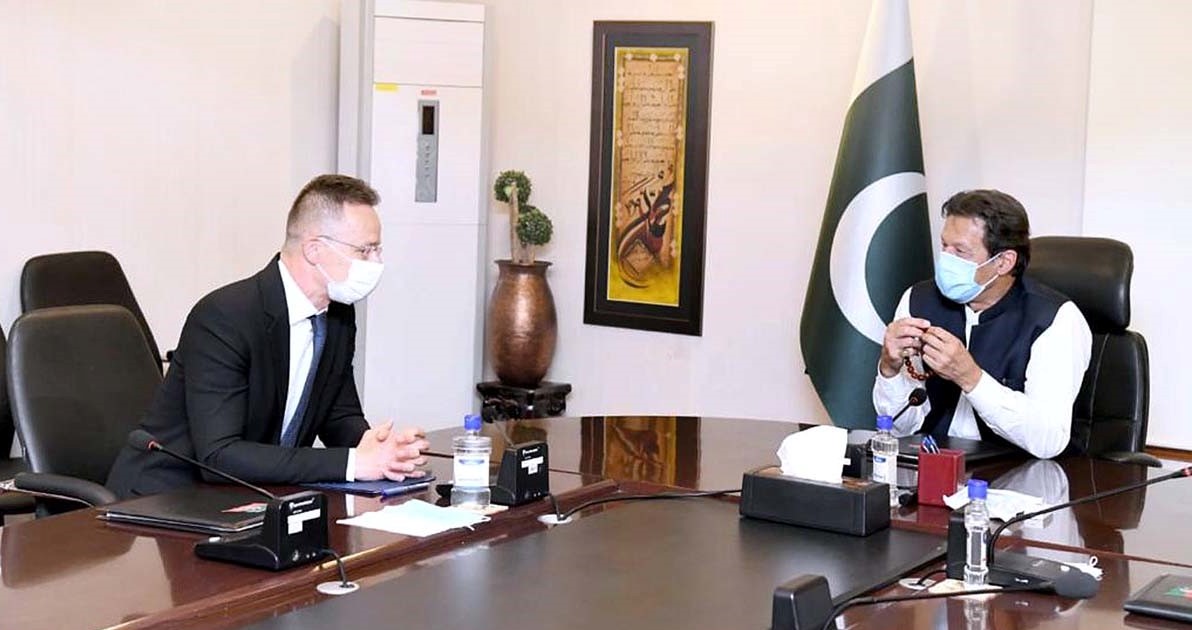 ISLAMABAD, APR 30 (DNA) – As Pakistan and Hungary Friday desired to develop economic partnership, the latter agreed to establish a credit line of $84 million for business-to-business cooperation and provide another $50 million for tied aid program.

“We have established a credit line at Hungarian EXIM bank to the extent of $84 million which is exclusively to serve the enhancement of business to business cooperation between Pakistani and Hungarian companies… We are ready to provide $50 million for a tied aid credit program to be launched in Pakistan in fields of agriculture, water, industry and food processing,” Minister of Foreign Affairs and Trade of Hungary Péter Szijjártó said in a joint press stakeout with Foreign Minister Shah Mahmood Qureshi here.

“This rolls the ball for economic partnership we want to build,” Foreign Minister Qureshi said apprising the media of the decisions reached between the two sides.

Qureshi said Péter Szijjártó was accompanied by representatives from 17 top Hungarian companies which interacted with Pakistani companies in a matchmaking B2B event held under the Economic Diplomacy Initiative.

Both the sides also signed a number of MoUs in fields of diary production, cyber security and others, Qureshi added. The foreign minister told media that Hungary had also expressed interest in starting direct flights between Pakistan to enhance people to people contact and promote business activity.

Foreign Minister Qureshi thanked for the Hungarian support to help Pakistan get GSP Plus status in European Union which doubled the Pakistan’s export to Europe. He said both the sides also exchanged views on FATF as how the forum was used and how ought to be used.

Both the sides agreed that the FATF should not be used as political tool rather only for checking money laundering and terror financing. The two countries agreed to hold their next round of political consultation in Budapest. Qureshi said it was after 15 years that Hungarian foreign minister was visiting Pakistan.

Péter Szijjártó told media that by visiting Pakistan after hiatus of 15 years, he had broken the unpleasant situation. He said the Hungarian government had understood the security and economic significance of the region.

Meanwhile, Prime Minister Imran Khan has underlined the importance of developing a strong economic relationship commensurate with friendly bilateral ties and the potential of Pakistan and Hungary.

He was talking to Hungary’s Minister for Foreign Affairs and Trade Mr. Péter Szijjártó, who called on him in Islamabad on Friday.

Imran Khan also impressed upon the Hungarian business community to take advantage of the business friendly climate of Pakistan and bring further investment into the country.

Views were exchanged on the adverse economic impact of Covid-19 pandemic.

The Prime Minister appreciated Hungary’s efforts in vaccinating its population. He underlined that Pakistan’s efforts have been aimed at ensuring saving people from dying of the virus, and at the same time preventing them from dying of hunger, by stimulating the economy.

On Afghanistan, the Prime Minister reiterated his conviction that there is no military solution to the conflict and that a negotiated political settlement is the only way forward.  He underscored the importance of responsible withdrawal and steady progress by the Afghan parties towards a political solution. He said peace and stability in Afghanistan would yield other significant dividends including enhanced trade and regional connectivity.