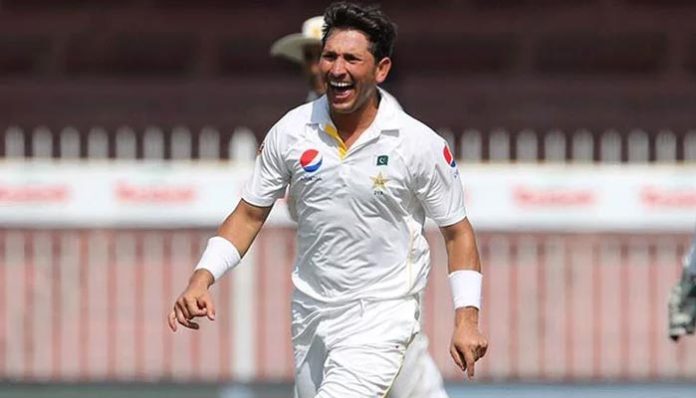 ISLAMABAD: Leg-spinner Yasir Shah, who has returned to the Pakistan team following a year of absence, is confident that the experience of bowling in the Test series against Sri Lanka will help him make the best use of his abilities,

Speaking to the media on the sidelines of the national training camp at Pindi Stadium, the cricketer seemed excited at leading the spin attack in the two-match Test series against Sri Lanka starting with the opening Test on July 16.

Shah said he had previous bowling experience in Sri Lanka which would help him make the best use of his abilities.

“Though I am back in the Test side following a year of absence because of injury, I am confident that the experience of bowling in Sri Lanka would help me make the best use of my leg-spin varieties,” he said.

Shah last played against West Indies during the 2021 summer’s away Test series. Though he has proved his fitness while bowling the lengthy spells in domestic cricket, he was not considered for the selection on the team that played recent home series against Australia.

“I am fit and have regained my form by putting in hard work with the coaches at National High-Performance Centre. With the training here I am sure that I would be in the best possible shape for the series.”

Despite having a very good leg-spin and flipper, Shah had struggled to make the best use of grog.

“I have worked hard on my googly. With the coaching and guidance of Mushtaq Ahmad and Saqlain Mushtaq, I feel I have improved a lot on that front. You would see me making the best use of wrong ones during the forthcoming series.”

“Off and on we used to discuss cricketing matters. Babar always backs his players and even told me to stick to a set line in order to get maximum purchase out of the wicket. With Sri Lanka wickets likely to suit spinners more I am hopeful to play my role in winning the Test series.”

Besides Shah, Nauman Ali, Mohammad Nawaz and Agha Salman will be there as spin options for Pakistan on the series.

Meanwhile, the camp got underway at the Pindi Stadium with national team members seen training at the nets for almost three hours. Following relatively cold weather during the entire last week, the sun has again started making outdoor activities a difficult proposition. However, the forecast for next week is pleasant with the mercury expected to come down to around 90 Fahrenheit from Friday.