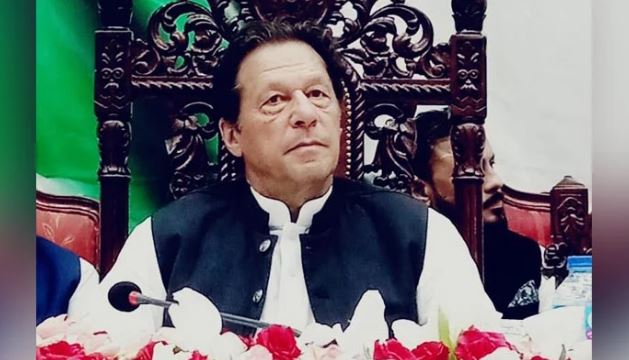 PESHAWAR: PTI Chairman Imran Khan Tuesday warned that he will obstruct PML-N leader Ishaq Dar’s plans, saying that Pakistan’s treasury is being handed over to someone who had been an “absconder for the last five years.”

Dar, who landed in Pakistan a day earlier along with Prime Minister Shehbaz Sharif, will take an oath as the country’s new finance minister tomorrow.

Speaking during the Ulema and Mashaikh Convention in Peshawar, the former prime minister alleged that Dar had made a deal under National Reconciliation Ordinance (NRO) before returning to Pakistan.

“It is unfortunate that the justice system could not stop Ishaq Dar,” he added. “A fugitive, after stealing billions of rupees, was roaming freely  abroad and was taking decisions for Pakistan.”

Comparing Muslim states with European countries, Khan said that there was only 20% of rule of law in Muslim countries. “If you want to see justice, then go to Switzerland. There is a 100% rule of law there,” he added.

He continued to say that those who want to see a welfare state should go to Sweden and Britain.

Speaking about his aide Shahbaz Gill’s arrest and alleged torture, the former premier said that JUI-F chief Fazl-ur-Rehman was part of a government where these cruel acts were taking place. “Sixty per cent of people belonging to this cabinet are out on bail,” he said.

Khan also spoke about the country’s economy while taking a jibe at the leaders in the government. He said that the economy has deteriorated while unemployment was increasing and these leaders have only come to hide their corruption cases and not to serve the nation.