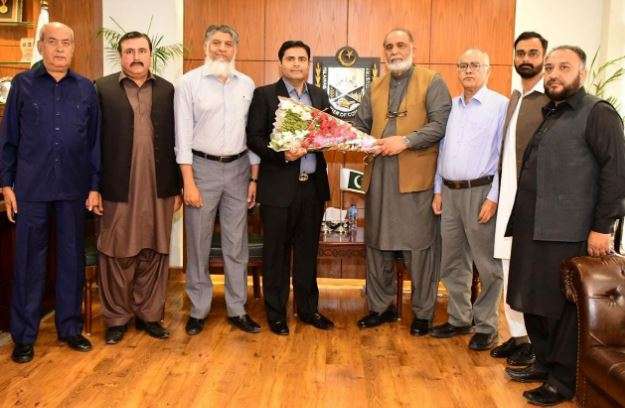 Islamabad, OCT 24 /DNA/ – Ahsan Zafar Bakhtawari, President, Islamabad Chamber of Commerce and Industry (ICCI) said that the people are facing great problems and the business of pharmacies is also suffering due to the shortage of Panadol in the market and urged that the government should address this issue on priority basis to save the consumers from further troubles. He said this while talking to a delegation of Pakistan Chemists and Druggists Association, Islamabad Chapter that visited ICCI led by its Chairman Mian Tariq Saeed.

Ahsan Zafar Bakhtawari said that there is a great demand for Panadol in the market due to rising cases of dengue virus and malaria, across the country, especially in flood-hit areas, but its shortage has exposed the patients to serious health problems. He said that the manufacturer has suspended the production of Panadol due to twofold increase in the prices of its raw material and emphasized that the government should take urgent measures to rationalize the prices of raw material to ensure re-start of its production and easy availability in the market. He assured that ICCI would cooperate with the Pakistan Chemists and Druggists Association, Islamabad Chapter to resolve key issues of their sector.

Speaking at the occasion, Mian Tariq Saeed, Chairman, Pakistan Chemists and Druggists Association, Islamabad Chapter highlighted the various issues being faced by their sector. He said that the price of raw materials used to produce the Panadol has witnessed a twofold increase which affected the availability of this product in the market and pharmacies were also losing business on this account and stressed that the government should address the issue causing its shortage in the market. He said that the online buying and selling of medicines is illegal under the Drug Act and stressed that the regulator should ensure strict implementation of this law as this practice is affecting the business of license holder chemists and druggists. He also showed concerns over the issues being faced by them from EOBI and Social Security Institution and said that ICCI should cooperate in their redress.

Nasir M. Qureshi, Executive Member ICCI said that high energy cost and tight drug regulations were the major hurdles for the growth of pharma sector in Pakistan and stressed that the government should consider deregulating this sector that would bring competition and reduce prices of medicines in Pakistan.

Malik Ashfaq, Qaiser Masood and others also spoke at the occasion and stressed that the government should address the issues of chemists and druggists to facilitate the growth of their business activities.