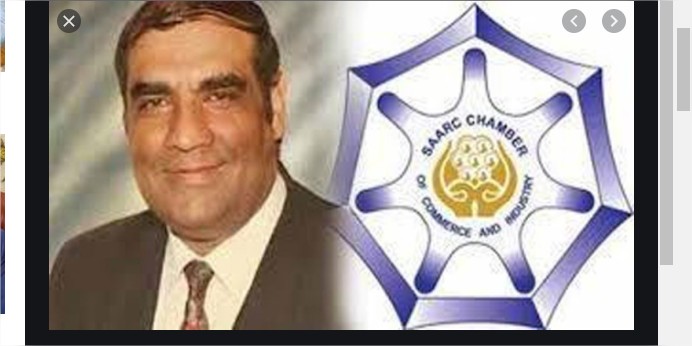 Briefly speaking on the occasion Iftikhar Ali Malik thanked the SVP and VPs from all member countries for their full fledged and overwhelming  support to him for promotion of intra trade and further establishing strong business linkages amongst the entrepreneurs of the South Asia. He said all out efforts will be made to strengthen regional economic cooperation besides achieving Chamber South Asia vision 2030 which he added will usher an era of progress, prosperity and development in the region.

He said that entire emphasis will be laid on achieving the objectives of chamber in true letter and sprit with consensus and VPs of all countries will be taken into confidence.He paid rich tributes to Ruwan for contributing towards encouragement of trade, Industry, small and medium enterprise and agriculture sectors in addition to safeguarding the economic and business interest of the region.

Iftikhar said that he will formulate viable strategies to take regional cooperation to new levels by exercising his sphere of influence which he added will result into betterment of the people of the region as well besides strengthening of economies in all member states.He said that in the larger interest of the region especially small countries, the avenues of economic cooperation with China will also be further explored which will ultimately benefit the business community of the region.

Welcoming Iftikhar Malik outgoing president Ruwan hoped that new leadership especially Iftikhar Malik during his tenure will take  all stakeholders on board and make strenuous efforts to implement the objectives and manifesto of the chamber mainly aimed at promotion of intra trade among member countries.