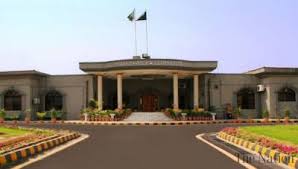 ISLAMABAD : The Islamabad High Court (IHC) dismissed a petition filed by US blogger Cynthia Ritchie against a judge’s verdict who had directed the Federal Investigation Agency (FIA) to file a case against her.

Ritchie had challenged the order of the Additional Sessions Judge of Islamabad at the high court, saying that the FIA should not register a case against her as she had not committed any crime.

The court said that it could not interfere in the FIA’s investigations and ordered the agency to continue its probe into the US blogger according to law.

Earlier, the petition against the verdict was heard by the IHC Chief Justice Athar Minallah, in which lawyer Imran Feroze Malik appeared in the court on behalf of Ritchie.

During the hearing, lawyer Imran Feroze Malik had read out the decision of the session judge regarding the registration of the case, to which the Chief Justice asked how he was affected by the decision.

Petitioner’s counsel replied that there were other aspects to this decision.

Justice Minallah had remarked that this was not an order to register a case directly, adding that the Federal Investigation Agency (FIA) had been ordered to conduct an inquiry first.

Advocate Imran Feroze had said that we[petitioners] are not objecting to the inquiry, only to the registration of the case.

In this regard, Justice Minallah had said that the court will not go into the merits of this case.

After hearing the arguments, the chief justice reserved the verdict.

The Additional District and Sessions Judge (ASJ) Jahangir Awan had directed the FIA to register a case against Ritchie, who has levelled harassment allegations against the PPP leadership after a public spat with the party.

The petitioner, PPP Islamabad President Shakeel Abbasi on Saturday had filed a petition stating that Ritchie had made baseless allegations against ex-prime minister Benazir Bhutto and a case should be registered against her.

In its two-page verdict, the court had said the US blogger had not denied that she created this tweet on social media.

‘Rehman Malik was the source of information about Benazir Bhutto’

Ritiche said that her earlier social media posts, which stirred a commotion in Pakistani politics, had no intentions to malign or defame anyone, instead, her tweets were taken out of context.

Talking to media outside the IHC, Ritchie maintained that she had informed the US Embassy about what had happened to her in 2011 and is still in touch with the American Citizen Services.

“The man who attacked me was a man of clout in the [Pakistan People’s Party]PPP [ruling] era, therefore, I could not understand the reason to inform Pakistani officials about the incident,” she said, adding that she was told things about former prime minister Benazir Bhutto by the interior minister of that time, Rehman Malik.

In a video broadcast live on Facebook, Ritchie had alleged that one of the party’s senior members had raped her while two others had “manhandled” her at a separate occasion.

She had stated that the incidents occurred in 2011 when the PPP was in power, and when the individual she accused of rape had been a senior minister. Geo News has attempted to reach out to the accused for comment but received no response so far.

Ritchie had further alleged that two other senior party leaders — a federal minister and former prime minister Yousuf Raza Gillani (who has publicly responded to the allegation) — had “physically manhandled” her when the latter “was staying the President House”.

In a subsequent textual post on Facebook, Ritchie had said that the alleged rape incident had occurred at the accused’s residence in Islamabad’s Minister’s Enclave in 2011, “around the [time of the] OBL (Osama Bin Laden) incident”.

“I thought it was a meeting about my visa but I was given flowers [and] a drugged drink,” she claimed, adding that she had “kept quiet” about the incident because “who in the [ruling government] would help me against the [accused minister]?”

However, she said she did tell someone about the incident at the US Embassy in 2011, but “due to ‘fluid’ situation and ‘complex’ relations” between Washington and Islamabad, she said the response “was less than adequate”.

“Through this application, it is brought to your notice that a woman, who goes by the name of Cynthia D Ritchie on Twitter has passed extremely derogatory and slanderous remarks about Shaheed Mohtarma Benazir Bhutto, through her Twitter handle/account,” the letter dated May 28 read.

“Her remarks being false, untrue, defamating and slanderous as they are, have caused immense pain and agony to the millions across Pakistan who revere and hold Shaheed Mohtarma Benazir Bhutto in high esteem,” it said.

“Your office is requested to take immediate action and initiate proceedings against this woman as prescribed by the law and under your mandate. A photocopy of the tweet, a true portrayal of her sick and disgusting mind is attached with the application,” the letter added.