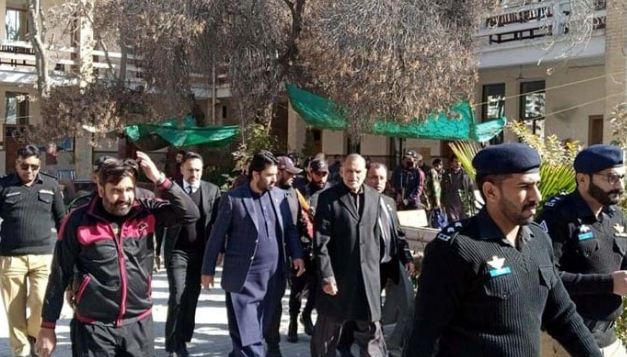 IHC Chief Justice Aamer Farooq announced the verdict reserved earlier today, granting bail to the PTI leader in the case filed against him in November 2022.

The senator’s bail has been approved against surety bonds of Rs200,000.

Swati has been behind bars since November 27, when he was arrested for the second time for using abusive language against the top military brass, including former army chief General (retd) Qamar Javed Bajwa. The septuagenarian hurled swear words at Bajwa.

Swati had filed a plea seeking release on bail in IHC in relation to the case filed against him on November 26. His earlier plea, filed on December 21, was dismissed by trial court judge Azam Khan, who said that the senator had committed the same offence twice.

In his application, the senator stated that he did not post derogatory remarks against any institutions. He added that the prosecution has no proof against him despite an investigation.

The application read that Swati is 75 years old and a heart patient and that jailing him would be a sentence without conviction as all evidence against him is documentary.

IHC Chief Justice Aamer Farooq conducted the hearing of the case without the presence of the special prosecutor. Swati’s lawyer Babar Awan appeared in court on behalf of his client.

Awan said that Swati’s son wants to put his viewpoint before the court.

“My father had written a letter, I want to read it with the court’s permission,” said Swati’s son.

At this, Justice Farooq said that the letter is present before the court.

The court said that a larger bench would be constituted to settle this matter once and for all.

Swati’s lawyer said that the court should look into this matter today, to which the court said a larger bench cannot be formed today.

Meanwhile, Swati’s son withdrew his letter of no-confidence against the IHC chief justice.

The court then inquired about the position of the challan, to which, the Federal Investigation Authority (FIA) replied that the challan was submitted on December 24, 2022, and the hearing will take place on January 3.

The deputy attorney general said that the PTI senator has committed the crime again and a case has already been pending.

The FIA said that Swati did not surrender his Twitter account. At this, the court said that the investigating agency itself ended the physical remand.

“Is there a chance of tampering?” the court questioned the FIA officials.

To this, the FIA said that Swati did not deny the tweet.

The court then reserved its verdict in the case.

Swati is booked in multiple cases across the country for his controversial tweets against senior military officers.

Initially, the senator was arrested by the FIA on October 13 after he posted a hateful and threatening message against the then-army chief, judiciary, and other state institutions on his official Twitter account.

He had secured bail in that case, but on November 27, the FIA arrested him again for using abusive language against the top military brass, including Gen (retd) Bajwa.

On December 2, Balochistan police arrested Swati in a similar case registered against him in Quetta. At the time of his arrest, he was already on judicial remand in Adiala Jail and was shifted to Quetta under a transit remand acquired by the Balochistan police.

Later, the Balochistan High Court (BHC) ordered the quashing of all cases registered against the senator in the province. Once BHC issued the order, the Sindh Police took the senator into custody over the issue of controversial tweets.

The senator then approached the Sindh High Court for bail. The court also directed the quashing of all cases registered against the senator in the province.

Following the orders, Islamabad Police took the senator into its custody and brought him to the federal capital. He is still in custody.