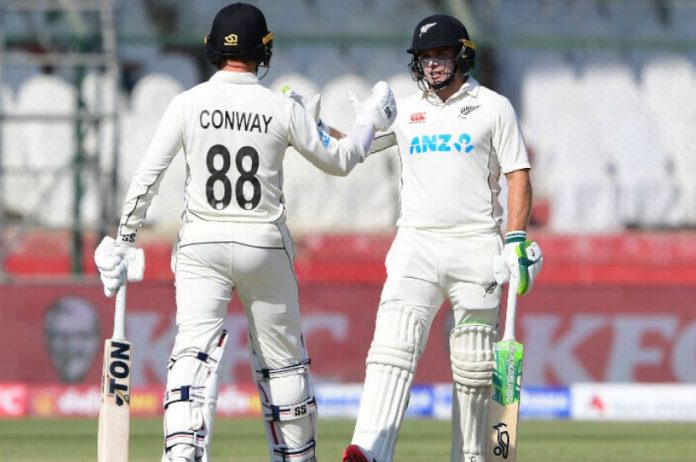 Karachi, JAN 2: Opener Devon Conway hit a dominating century on Monday to guide New Zealand to 226-1 at tea on the first day of the second Test against Pakistan in Karachi.

The stylish left-hander struck 120 for his fourth Test hundred, while Kane Williamson was on 29 at the other end as the Kiwis progressed from 119 without loss at lunch after losing Tom Latham for 71.

Conway put on a solid 134 with Latham after New Zealand won the toss and batted on a National Stadium pitch which had a hint of grass but not much for the bowlers.

The two-match series is tied at 0-0 after the first Test — also in Karachi — ended in a tame draw. Pakistan’s three-pronged pace attack looked helpless until Naseem Shah struck in the sixth over after lunch, trapping Latham leg-before with a sharp incoming delivery.

Latham, who scored 113 in the first match, hit nine boundaries in his 100-ball knock, his 24th Test half-century.

Conway was lucky to survive a sharp chance when Saud Shakeel failed to hold on to a miscued drive off Hasan Ali on 89. He has so far hit 16 boundaries and a six.

Conway and Williamson have added 92 for the unbroken second-wicket stand.

Pakistan brought on Abrar Ahmed in the ninth over, but there was no sign of turn as Conway smashed a boundary and a six off the spinner’s second over.