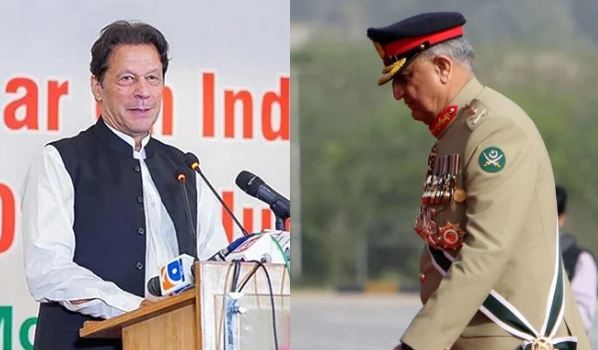 Imran made the revelation in conversation with journalists on Saturday as he continued the tirade against the former army chief, whom he blames now for his government’s ouster.

The PTI chief recently admitted that granting an extension to Gen (retd) Bajwa was a “mistake” and had also accused the ex-army chief of “betraying” him. Also, in a conversation with journalists yesterday, he revealed that he was not in contact with the establishment “for now”.

As the PTI presses the government on holding snap polls across the country, Imran predicted that he sees elections taking place in either March or April.

He also added that PTI’s members of the National Assembly would appear before Speaker Raja Pervez Ashraf to confirm their resignations on Monday (December 26).

The government, however, has repeatedly ruled out holding early elections citing several reasons, including floods, and said they might take place in October 2023.

“We will also remain allies with the Q-League (Pakistan Muslim League-Quaid) as they have stood by us,” the PTI chief said as the political turmoil in Punjab persists.

“I will not inflict pain on the masses for remaining in power. Once I form my government again, I will not compromise on anything,” the PTI chief said.

Taking a swipe at Minister for Foreign Affairs Bilawal Bhutto-Zardari, he said that the Bhutto scion has gone on more visits abroad than he did during his three-and-a-half-years in tenure.

“Also, if he is claiming that he is paying for foreign trips through his pocket, then are these his private visits?” he wondered.

He berated the PPP and Pakistan Muslim League-Nawaz (PML-N) for getting “foreign funds” and “not having” receipts for them. “We have a database of 40,000 donors.”