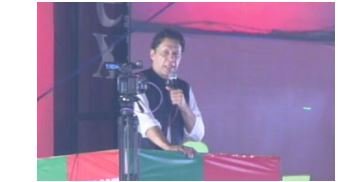 ISLAMABAD: Pakistan Tehreek-e-Insaf (PTI) Chairman and Imran Khan on Saturday said the government wanted him to pick fight with Pakistan Army and judiciary, clarifying that they would not resort to it.

He had announced the protest rally last Saturday, saying that the demonstration would be held for Islamabad locals and those from Rawalpindi, while people from other major cities would have their own local protests.

The PTI posted on its official Twitter account that Imran would address the crowd at 7pm. The party also posted a list of screening sites in various cities for his speech. However, Imran arrived at the protest venue a little under an hour after the originally scheduled time and delivered his speech around 9pm.

At the start of his speech, Imran explained why he had chosen to end his long march on May 26. “I knew there would be anarchy that evening and people would have come face to face with the police and the Rangers,” he said. “[This] nation, the police, the Rangers [all ] are mine. I don’t want to spread anarchy within my nation. I had set out just for one purpose: imported govt unacceptable.

“I had set out for one reason, and that was to [show] all the institutions where nation is standing and what it wants and that it will never accept these thieves.

“I invited you all today because I wanted to prove that if they hadn’t used force on May 25, then there would have been a sea of people in Islamabad and it would have said one thing: imported govt unacceptable.”

Addressing his political rivals, he said he knew that they wanted him to fight the army and the judiciary but “listen closely, our life and death is in Pakistan.”

Addressing the crowd before Imran, Rashid termed July as an “important month”, and called on the people to ensure the PTI’s victory in the Punjab by-elections on July 17.

Addressing the country’s institutions and the establishment, he also said that early elections were in the country’s best interest.

PTI leader Pervez Khattak, meanwhile, said the current inflation in the country was the proving to be the “destruction” of the public. He questioned why important decisions were going in the government’s favour and warned that “no one will be safe if any injustice happens with Imran.”