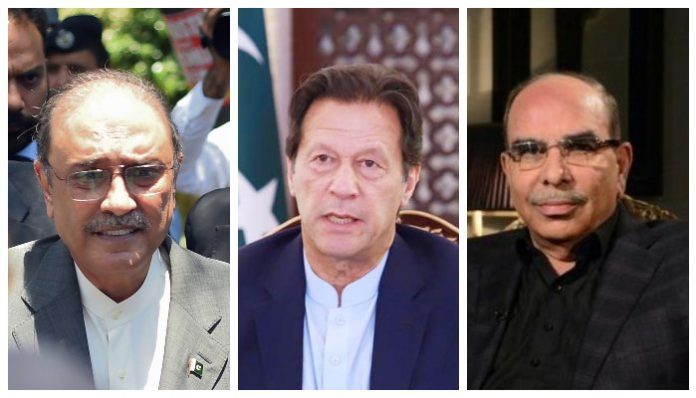 The PTI chairman’s response comes after an audio of a conversation between Riaz and Zardari was leaked, where the businessman could be heard giving the PPP supremo a message reportedly from the PTI chairman.

The audio’s date and time have not been confirmed as of yet, but Riaz could be heard saying that Khan has requested him to mediate between the two political leaders.

But while speaking to digital journalists in Khyber Pakhtunkhwa’s capital today, Khan — who became the first prime minister to be voted out through a no-confidence motion in April — refuted claims of him wanting to patch up with Zardari.

In response to a question, the ex-premier said whilst in power, there was “a lot of pressure” on his government to accept Isreal as a sovereign state — amid the Abraham Accords.

“We were sent a message that you should think about your country […] but at this time, I cannot reveal who had sent the message to us,” the ousted prime minister said.

Although he refrained from disclosing the names of the people, Khan told journalists that a United States “influenced lobby” wants Muslim states to accept Israel.

The ex-premier’s comments come as Israel President Isaac Herzog said that he had had an “amazing experience” while meeting a delegation, mainly comprised of Pakistani expatriates, living in the United States.

But while responding to media queries, the spokesperson of the Ministry of Foreign Affairs categorically rejected the notion of any delegation from Pakistan visiting Israel, stressing that Pakistan’s position on the Palestinian issue is clear and there is no change in it.

Moving on, the PTI chairman reiterated that he had not made a deal with anyone and that he had called off the long march on May 26 to avoid bloodshed — as chaos gripped Islamabad.

“I am saying this from the last 26 years: Zardari and PML-N are the same.”

On the matter of PTI members of the National Assembly’s (MNAs) resignations, Khan said they have resigned from their posts, and there was no need for them to verify their resignations.

“We had announced in front of the National Assembly’s speaker that we have resigned. There is no need for a member to verify their resignation individually […] the day we come back to the assembly, it will mean that we have accepted this imported government.”