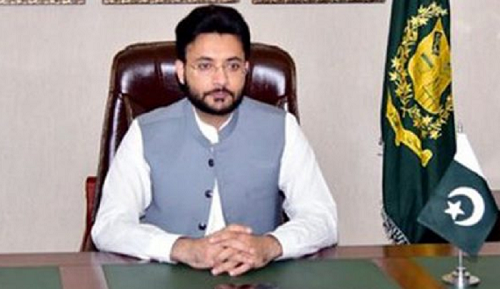 In a statement issued from PTI Central Media Department (CMD) here on Friday, Farrukh Habib stated that all the criminals in the imported government think day and night how to remove Imran Khan from the hearts and minds of the people.

Lashing out at the imported Information Minister Maryam Aurangzeb, he said that PDM government’s propaganda brigade servant knew nothing except badmouthing.

Farrukh Habib said that this criminal group has ruined the lives of the people, as they destroyed the country economically, which was evident from record 45 percent upsurge in inflation, leading to the closure of factories, rendering large number of people jobless amid no sign of investment.

He said that if the imported rulers did not have the courage to face the public because they would face wrath the people who were crushed under skyrocketing inflation.

Farrukh Habib reminded that Imran Khan and PTI were doing their best for the rehabilitation and relief of the flood victims but he was doing all these for photo shoots like Shohbaz Sharif and fake Maryam Safdar.

He stated that flood warning was issued two and a half months ago, but the imported government was busy in cracking down on critics, political opponents and journalists.

Farrukh Habib said that due to the incompetence, inefficiency and ruthlessness of the imported government, the floods unleashed devastation across the country.

He noted that the most corrupt partner of the imported government has been in power in Sindh since long and the people of the province were drowning in the floods.

Farrukh Habib said that callousness of the rulers could be judged from the fact that on one hand the country was suffering from calamity like floods and on the other the government was committing economic murder of the flood-stricken people by increasing electricity and fuel prices.

He went on to say that the imported persons imposed on the country through foreign conspiracy were a real security threat to the country, adding that Imran Khan was the only unifying force in the country as he could only unite the nation.

He stated the people’s lives could only be saved to rid the country of these looters and plunderers, adding that the imported government should announce the elections and do some mercy on the people of the country.

Farrukh Habib jibed that everyone saw the foreign funding Imran Khan being received in the telethon for the flood victims, saying that Pakistanis around the world trust on his truthfulness and honesty, as no one gave money to these thieves and robbers rather they faced humiliation everywhere in and outside the country.

He stated that the official data showed that economy of Pakistan was booming during PTI government; however, the imported government reversed the hard-gained within short span of time.

Farrukh Habib made it clear that Imran Khan would never accept these thieves come what may, adding that instead of utilizing their energy to harm Imran Khan, they should pay attention to the plight of the people.

He stated that people rejected PDM’s corrupt gang and they stood by Imran Khan in his struggle to achieve the real independence.