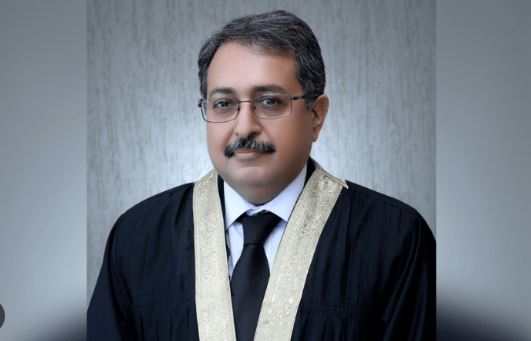 Islamabad, NOV 18: Islamabad High Court (IHC) Chief Justice Aamer Farooq said on Friday that as per intelligence reports, there were fears of another attack on former prime minister Imran Khan.

He passed the remarks while hearing a petition filed by traders regarding road closures due to the party’s protest.

Earlier, Justice Farooq had sought a report from the inspector general of Islamabad police on the petition and directed the interior ministry to devise a strategy to ensure hassle-free protests in Islamabad.

During today’s hearing, the judge, quoting intelligence reports submitted in court, said that there was a possibility of another attack on Imran’s life.

“It is the responsibility of the government and the state to look into the matter,” he said.

It is pertinent to mention here that the PTI chief was injured during a gun attack while leading the party’s long march in Punjab’s Wazirabad on November 3. A PTI supporter, Moazzam Nawaz, was killed in the incident while 14 others, including the former premier, were wounded.

At the outset of the hearing, the IHC CJ instructed the PTI to submit a fresh plea to the Islamabad administration seeking permission to stage a sit-in in the capital.

“If the issue is not resolved, a fresh petition can also be filed,” he said, stating that it was not the court’s responsibility to allot a place for the sit-in.

“It is the administration’s discretion if they want to give permission for D-Chowk or F-9 park.”

Justice Farooq observed that the administration should decide the rules and regulations for the protest. “The same was ordered by the Supreme Court as well,” he said.

The court also asked if roads in Islamabad were still closed and sought an update on the situation in other provinces.

After the Wazirabad firing incident, enraged PTI supporters had taken to the streets in major cities across the country, prompting the federal government to reprimand the provincial governments.

“What happened to the directions given to the provincial government by the Centre? What will happen if the provinces don’t comply with the federal government’s directions,” IHC CJ inquired.

He went on to say that protesting was the democratic right of every political and non-political party, but upholding the rights of common citizens was also important.

“Even in England, people gather at 10 Downing Street. But they protest, not block the streets,” he pointed out.

“When the SC said they can’t stop the long march, you blocked the GT Road and other motorways,” Justice Farooq told the PTI lawyer, calling on the party to “demonstrate responsibility”.

He then reiterated that if the PTI wanted to hold a protest it had to submit a new application to the administration. “If permission is given, make sure roads are not blocked and citizens’ rights are protected.”

Subsequently, the hearing was adjourned till November 22.

The traders in the petition, filed earlier this week, had pointed out that the SC earlier this year had sought an assurance from the PTI that it will confine its protest to a specified place.

However, the party violated its undertaking and marched towards D-Chowk and set trees ablaze and damaged public properties.

The rally was finally called off on account of fear of bloodshed, it added.

The petition stated that the protest by political parties was to be seen through past experience starting from 2014 when a political party started a sit-in in the city for almost five months during which vital government buildings, including Parliament House and Pakistan Television, were attacked.

It requested the court to restrain the political party from entering Islamabad’s commercial areas. Permission for public demonstration could be made conditional with a proper undertaking by the PTI of confining itself within the designated place outside the periphery of the capital city.