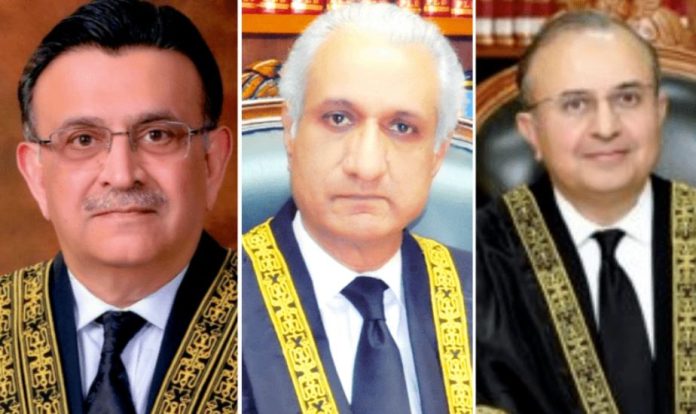 The apex judge passed the order after a three-member Supreme Court (SC) bench, comprising CJP himself, Justice Ijazul Ahsan and Justice Syed Mansoor Ali Shah, took up the petition that called the new ordinance an “alleged violation of fundamental rights”.

During the hearing today, Justice Bandial asked Khwaja Haris, Imran’s lawyer, how the recent amendments make the NAB law ineffective. “How are they a violation of basic human rights?”

At the outset of the hearing, PTI’s lawyer contended that after the amendments several corruption cases were withdrawn while pending inquiries were also suspended midway. “The government has curtailed powers of NAB courts to hide [its] corruption.”

Haris argued that amendments in several clauses of the new ordinance had given relaxations to government officials.

Separately, in response to a question about the government’s stance on the matter, Justice Bandial noted that neither the watchdog nor the federal government had submitted their responses in the case so far.

“NAB has said that it will adopt the arguments of the attorney general,” Justice Ahsan recalled. “The bureau has presented their arguments verbally but hasn’t submitted anything written yet.”

At one point during the hearing, the CJP said that the court had to see if the new laws violated the Constitution and fundamental rights.

Subsequently, the apex judge ruled that the case will be heard on a daily basis and adjourned the hearing till Oct 5, 12:30pm.

In his petition, Imran Khan had claimed that the amendments to the NAB law were made to benefit the influential accused persons and legitimise corruption.

The coalition government led by the PML-N had introduced 27 key amendments to NAO, but President Dr Arif Alvi did not accord his assent to these. However, the bill was adopted in a joint sitting of parliament and notified later.

The petition pleaded that the fresh amendments tend to scrap corruption cases against the president, prime minister, chief ministers and ministers and provide an opportunity to the convicted public office-holders to get their conviction undone.

“The amendments to the NAO is tantamount to depriving the citizens of Pakistan of having access to law to effectively question their chosen representatives in case of breach of their duty towards the people of Pakistan,” the petition argued.

Moreover, the word “benamidar” has been re-defined, making it difficult for the prosecution to prove someone as fictitious owner of a property, the petition argued.

The application has also challenged the second amendment to the law done by the coalition government on Aug 16 in which offences involving misappropriation of less than Rs500 million were taken out of the purview of the law.

Moreover, absconders who were punished under Section 31 of the ordinance in absentia were also taken out.

The petition stated that most of the changes were ‘person specific’.

The petitioner pleaded that it would be just and fair in protecting the constitutional and fundamental rights of the citizens that NAB should be asked to provide details of all cases, which relate to prominent and influential holders of public office, especially regarding cases pertaining to offences of owning assets (movable and immovable) beyond known sources of income and misuse of authority.

However, the petitioner feared, the recent amendments operated to preemptively exonerate public office holders or their co-conspirators from offences of corruption.

The petition claimed the amendments were also ultra vires of the fundamental rights guaranteed to people in articles 9, 14, 18, 24 and 25 of the Constitution.

The NAB (Second Amendment) Bill 2021 states that NAB’s deputy chairman, to be appointed by the federal government, would become the acting chairman of the bureau following the completion of the tenure of the chairman.

The bill has also reduced the four-year term of the NAB chairman and the bureau’s prosecutor general to three years. After approval of the law, NAB will not be able to act on federal, provincial or local tax matters. Moreover, the regulatory bodies functioning in the country have also been placed out of NAB’s domain.

It says that “all pending inquiries, investigations, trials or proceedings under this ordinance, relating to persons or transactions … shall stand transferred to the concerned authorities, departments and courts under the respective laws.”

It has also set a three-year term for the judges of the accountability courts. It will also make it binding upon the courts to decide a case within one year. Under the proposed law, it has been made binding upon NAB to ensure the availability of evidence against an accused prior to his or her arrest.

According to one of the key amendments, the act “shall be deemed to have taken effect on and from the commencement of the National Accountability Ordinance 1999”.