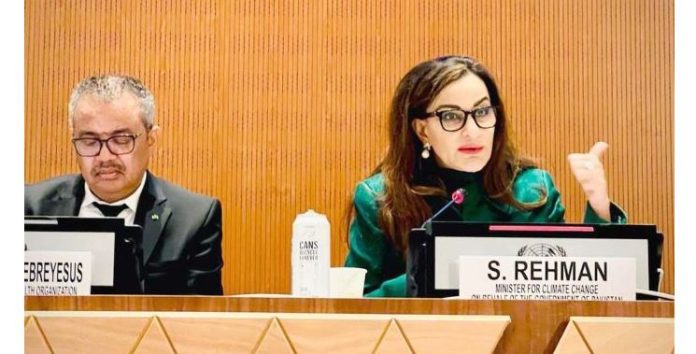 The Federal Minister was addressing at the forum in Geneva to launch the second Humanitarian Appeal with the UN Office for the victims of the devastating floods in Pakistan. She said, “We have been working round the clock, flat out through the after shocks and still continue but just to pick up the pieces honestly we will literally need a new coalition of the willing as it can be done for the wars so it can be done to save lives.”

The Minister underlined that in the monstrous downpour that inundated more than one third of her country approximately 1,700 people had lost their lives that was still rising, adding, “and close to 13,000 are injured, 7.9 million still displaced whereas women and children make up 70% of the total 33 million affected population.”

The Climate Change Minister mentioned that one third of all recorded deaths and injuries were children, however, the country was still in the longest rescue, relief and life saving phase crossing 16 nightmarish weeks.

She said it was no ordinary disaster monsoon and floods as the nation was used to all of them. “But this is Climate Change making landfall in a country with almost no carbon footprint and as you saw we are responsible for less than one percent global greenhouse gas emissions.”

“As the magnitude of the tragedy unfolded because it took much longer than any other disaster we have experienced, it is becoming clear to all that it was the meta climate of the century crossing all records for the whole world not just for Pakistan.” She added that no evidence was found highlighting such massive population and area affected in any climate event in the world history.

The Minister pointed out that most of the videos presented the later parts of which showed inundated swathes of land were from the southern part of the country. “If you find ground in the South which is a dryland then it is hard to find means for shelter, to get shelter to many areas let alone food, health and hygiene because there are so many in the stress from the trauma of displacement, death and now of course disease.”

While comparing the scale of devastation of floods, she said 33 million people were affected that were seven million more than the entire population of Australia.

“Imagine rescuing, feeding, sheltering and resettling. It is beyond the available resources in many ways for any of us.”

She added that the damage was colossal as this was principally because of three different types of flooding including flash flooding, hill torrents and the monster monsoon. They had all clustered in one defining climate disaster to create new records of extreme weather and water volumes, volatility and unpredictability, she added.

Almost, 34 districts were still crisis affected with 46,000 square kilometers 16 weeks later in fluid conditions, no pun on water with just again for perspective was more than Switzerland’s entire physical area. “The affected population in these districts is again more than the size of Portugal and Switzerland’s population combined.”

“These are not statistics you saw that these are real people on the ground whose eyes are still wakened from the shock that they have faced because overnight they have been turned into poster children of extreme vulnerability with futures that are entirely precarious and particularly for women who are layered with another burden of compounded social fragility.”

She added that with 11 districts still under water it was quite surreal to see Pakistan Navy deployed in inland terrain to service those who have survived. We have never had the Navy inside the country but it has to.”

She added that the inundation had increased the risk exposure of millions pushed into fresh perils by the health emergency which was now mincing the country.

“We are urgently in the need of life saving medicines among other things that is all part of your appeal document. And I am sure you can see what else can be sent to the ground.”

The Minister highlighted that for the government of Pakistan and its people it was a real race against time as winter was also approaching. “Left to the mercy of open sky, shelters have been made available for some 598,000 masses while over 7.9 million are still scrambling for the dryland as you saw many of them were inundated which we desperately need as cold weather is very near.”

Sherry Rehman noted that some four million people were living in the areas where temperatures reach sub zero and even in the warmest affected areas mercury typically falls below 10 degrees Celsius.

The Minister also said that winter was approaching and goods for winter to have the affected survive to another bit of winter was the really need of the hour.

She said with FAO survey suggesting 9.4 million acres standing crops damaged but even more acres of standing crops were inundated and affected. “This will directly put at risk 14.6 million who live and work very close to nature in the line of a food sector and agriculture crisis.

She added that livelihoods would continue to face severe aftershocks as the cattle etc. were all drowned and 15.4 million more people would be pushed into hard scrabbled poverty and there were already many people.

The Minister informed that the relief efforts were also slowed down as the fury of the floods had whipped out over 13,000 kilometers of roads and torn down 440 bridges all over the country. Moreover, the railway lines were still not fully restored in the affected areas.

“I am here of course to ask for the burden to be shared, meeting the needs on the ground even for the relief phase is beyond the overstretched capacities of any one country especially one [Pakistan] that has been already paying for the climate losses at about 9.1% of our GDP.”

She added that Pakistan’s export crops were almost all wiped out particularly in the Sindh province which was half of the country’s food basket. Amid huge quantum of food imports to be made after this flood to feed our people the energy crisis would one of the many to be faced by the nation, she added.

With debt payments looming and farmers and many other impacted sectors already demanding loss and damage by the federal government, she said. The country was unable to extend any economic stimulus package that could relieve the stress rather was still battling in a long struggle to save lives and make joint surveys in affected areas, she added.

“All we are saying is please don’t leave us alone to face the frontline of what the UNSG said was an outcome of mankinds’s war on nature. We have fought enough in another 20 year-long militarized war next door to us, where we lost 80,000 people to the war against violent extremism.

But we are NO match for nature’s long war on our doorstep. $300 million per day was spent on the longest military war. Just three days of war funding will save millions more in this appeal.” =DNA