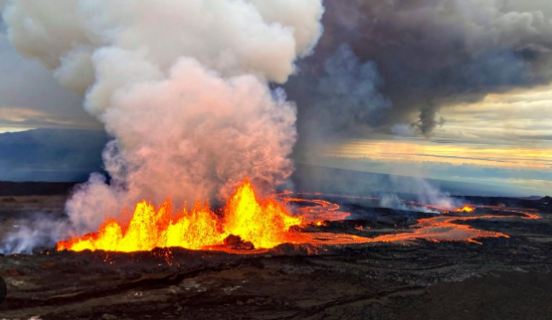 JAKARTA, Jan 15:Indonesia has recently raised its alert as the country’s volcanology authorities have reported hundreds of volcanic activities during the past week.

As of Saturday, 17 volcanoes across the Southeast Asian country have been on level II alert status, according to the latest report from Indonesia’s Center for Volcanology and Geological Hazard Mitigation (PVMBG).

he volcano has erupted for eight days,” Coordinator of the observation post Ahmad Rifandi said in a written statement.

Java Island, the Semeru volcano erupted once on Saturday and twice on Friday. It spewed out 700 meters to one-kilometer-high white and gray ash columns with thick intensity, Mount Semeru Monitoring Post reported.

e recommend all people who live surrounding the volcano not to do any activities around and stay away at least 13 kilometers from the eruption range, because the volcano has the potential to throw hot stones and pour hot clouds and lava,” Head of the monitoring post Mukdas Sofian said in a release.

The highest mountain in Java, the Semeru volcano erupted in December 2021, ejecting volcanic ash into the sky and raining hot mud on villages, killing at least 51 people and injuring 169 others.

Also on Saturday, The Ili Lewotolok volcano in East Nusa Tenggara (NTT) erupted and brought a potential threat of lava, according to the PVMBG.

The authority also reported on Thursday that three volcanoes in the country — Marapi, Kerinci on Sumatra Island, and Anak Krakatau in Sunda Strait — erupted at almost the same time on that day.

Anak Krakatau, which means the Child of Krakatau, has been sporadically active since it emerged from the sea at the beginning of the last century. The volcano is located far from the densely populated Java Island and Sumatra Island. However, it is near the busy shipping line connecting the islands. The volcano has erupted four times since Wednesday.

In all areas near each erupted volcano, regional authorities have banned all hiking and climbing activities and the PVMBG has issued an early warning for flights passing through those regions.

With 142 volcanoes, Indonesia has the largest population globally living in close range to a volcano. Around 8.6 million people live within a radius of 10 kilometers from the volcanoes, according to data from Statistics Indonesia (BPS).

As of Saturday, there have been no emergency measures and evacuation processes yet, but the PVMBG has strongly advised people living near the active volcanoes to always wear masks when doing activities to avoid any respiratory infections caused by exposure to volcanic ash.