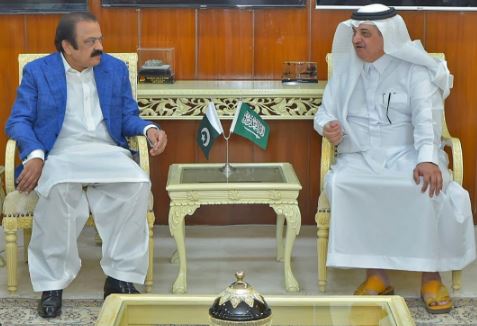 Talking to Saudi Ambassador to Pakistan Nawaf bin Saeed Al-Malki in
Islamabad on Saturday, the Interior Minister congratulated the Custodian
of the Two Holy Mosques and Saudi government for excellent arrangements
for Hajj.

The Interior Minister said that Pakistan and Saudi Arabia would jointly
face all internal and regional security challenges.

Expressing gratitude to Saudi Arabia for the successful organization of
Road to Makkah project to facilitate Pakistani Hajj pilgrims, he said
Saudi always helped Pakistan in odd hour. Relations between Pakistan and
Saudi Arabia were based on brotherly, long-standing and historical
roots, he added.

He also thanked the Saudi government and embassy for facilitating
Pakistani Hujjaj and making special arrangements for them.

The ambassador said that over 80,000 Pakistani took benefit from Road to
Makkah project this year.