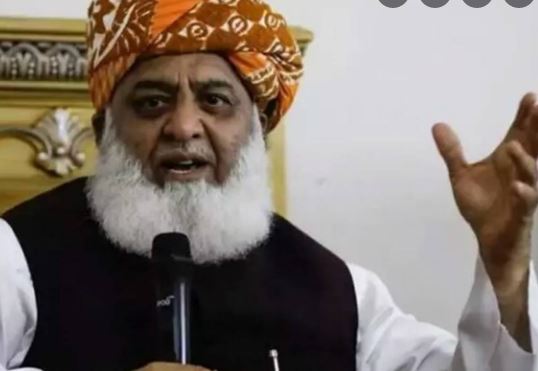 PESHAWAR, July 30 (DNA): Vowing to fight against what he called the
‘forces of evil’ alone if nobody stood by him and his party, Pakistan
Democratic Movement (PDM) (an alliance of political parties) President
and Jamiat Ulema-i-Islam-Fazl (JUI-F) chief Maulana Fazlur Rehman
categorically said on Saturday that he would not bow to any pressure and
would never admit defeat.

“Lo and behold! We have never surrendered before anyone,” he said it
aloud, and grumbled that although the state institutions were mostly
neutral, there were some elements in them who still had a soft corner
for the Pakistan Tehreek-i-Insaf (PTI).

Addressing a press conference, the JUI chief minced no words in saying
that he and his party had reservations over the role of ISI’s Peshawar
chapter.

Rejecting the PTI’s claim that a ‘foreign conspiracy’ was behind the
ouster of its government, Fazl asserted that in fact the conspiracy was
not hatched for the ouster of the party’s government, but to destroy the
morality of the country’s youth.

“Imran Khan used to say that he was ousted by a foreign power. Imran was
not ousted but brought in by global power,” the JUI-F chief said.

Maulana Fazl criticized the former prime minister and said that it is
not enough to remove him from power but it is also necessary to undone
his entity.

Fazl alleged that the last government of PTI had tried to implicate the
opposition leaders in ‘fake’ cases. “Political parties have their own
manifestos,” he said, adding it was up to the people to decide the fate
of these parties in elections.

The JUI-F chief said that there may be grievances from some individuals
but not with institutions. “Our demand was that the establishment should
be neutral,” he remarked.

Fazl lambasted Imran Khan and said that the one who asked for votes in
favor of the Israeli candidate in Britain, speaks of freedom and
education to the new generation.

Maulana alleged that the US Consulate continued to pay house rent to
Imran Khan and the former prime minister also received foreign funding
from Israel and India.

The PDM chief said that fighting a political and constitutional battle
is the need of the hour. He further said that if any force works to
destroy the morals of the youth, then the responsibility lies with the
religious scholars.

“Respect for the judiciary is important to us,” Fazl said. But if a
judge becomes controversial and gives protection to one party, this
could have long-term consequences, the JUI-F supremo said.

Maulana Fazl questioned and said, “Will all the decisions will be made
by the three-member bench?” He said that the Prime Minister is working
together with all his subordinate institutions.

The PDM president said that he wanted all parties, part of the alliance
and now part of the coalition government, to jointly contest
by-elections against the PTI.

“We have to save the country and will fight the by-elections like one
party,” the JUI-F chief said.

“Right now, I want to see this arrangement only for the by-polls, while
for the general elections, we will decide later,” he added.

Fazl claimed that the entire assembly of Kashmir has been bought by one
person.