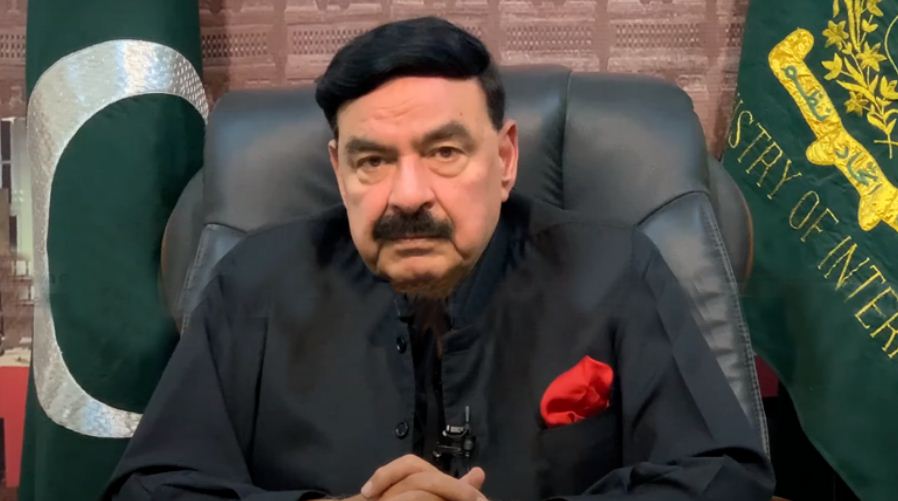 ISLAMABAD – Minister for Interior Sheikh Rashid Ahmed on Sunday said that there was an “international scheme” under way to carry out terrorist activities in major cities, calling for Pakistan to take strict steps and perform a responsible role.

In an interview with Geo News show “Naya Pakistan“, Rashid was questioned on whether he had seen evidence linking India with Lahore’s Johar Town blast and if India’s involvement could be conclusively determined.

“I have no doubt [on India’s involvement],” Rashid responded.

He said a “very dangerous group” had been apprehended in Karachi but added that there was a major problem in Pakistan of terrorists being released on bail.

The interior minister said people released from jails abroad were brought to Pakistan and “there is an international scheme to carry out events of terrorism in major cities such as Karachi, Lahore, and Islamabad.”

“India doesn’t know how well trained our agencies and police are now — these are not institutions from 1978 [or] 1979 — they are working with advanced technology and we have our eyes on all matters and we were expecting an attack in Lahore.

“Pakistan should take strict steps because India is not desisting [from destabilising activities in Pakistan],” the minister said.

Rashid recalled that “some people among us were talking of opening trade with India”.

“How can we resume trade with them?” he questioned.

The interior minister stressed that Pakistan needed to play a “strict, forceful and responsible role” because nothing was more important than the country’s security. He pointed out Indian presence in Afghanistan and said it was becoming a major issue with “a lot of venom being spewed” and accusations made against Pakistan.

“Efforts are under way to sandwich us in this situation but hopefully we will emerge successfully from this,” he said, adding that Pakistan’s army, institutions, law enforcement and civilian agencies were “fully alert and ready”.

The interior minister also pointed out that the blast in Lahore was carried out a couple of days before the Financial Action Task Force’s decision on Pakistan’s grey list status — at a time when Pakistan had already fulfilled 26 of the 27 items on the June 2018 action plan — and “we were already expecting an incident in Lahore or Karachi.”

Addressing a press conference alongside the Punjab police chief and federal Information Minister Fawad Chaudhry, Yusuf had said the mastermind of the blast which killed three people and left 24 others injured “is an Indian citizen and he is associated with [Indian intelligence agency] RAW”.

“The IGP (inspector general of police) said we have intelligence that a foreign intelligence agency was involved, so today without a doubt I want to say, [the circumstances] of this entire attack lead to Indian-sponsored terrorism,” the NSA had said.

The interior minister also hit out at the opposition, saying that their role in the country’s politics had diminished.

He advised opposition parties to “come back on the train track” and said the prime minister was “blessed that he got such a tired opposition”.

However, he did praise the opposition parties for their total support to the Pakistan Army in the military’s briefing on national security.

He said he had never seen such a “fantastic meeting” before and everyone had agreed that nothing came before Pakistan. Rashid said that in a month or two, the opposition and the government would have good relations again and that politics would be based on national security and prioritising Pakistan.

He said Chief of Army Staff Gen Qamar Javed Bajwa had assured the army’s support to the elected government in the next elections.

Rashid also addressed the Afghan situation and said Pakistan was engaged in efforts to bring the Afghan government and the Taliban to the negotiating table. However, he said planning on a strategy for border camps was needed in case of refugee influx.