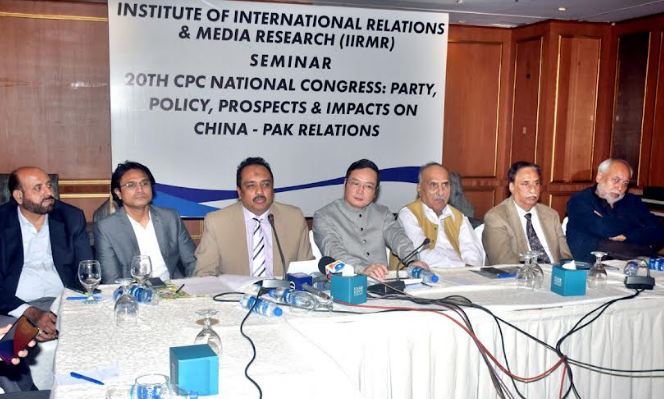 By Our Staff Reporter

LAHORE: Chinese Consul-General in Lahore Zhao Shiren has said four extra corridors are being added to the flagship China-Pakistan Economic Corridor (CPEC) as both Islamabad and Beijing have agreed on it during Prime Minister Shehbaz Sharif’s recent China visit.

Speaking at a seminar here on Sunday on impacts of the policies adopted in the 20th congress of the Communist Party of China that elected President Xi as its general secretary for another five-year term, he said Sharif’s maiden visit as PM has been “unprecedentedly constructive and successful” as both sides agreed to adding four new corridors – digital, industrial, green and health – to the flagship CPEC project.

In the wake of questions raised during the seminar on slowing down of work on CPEC in the past, the diplomat said he would not blame anyone, neither in China nor Pakistan, for it but could assure [Pakistanis] that from now on the pace would pick up.

He said that the project would benefit both China and Pakistan but more to the latter and urged upon Pakistanis that being on the driving seat they should take ownership of the project, while Chinese could only facilitate them in this regard.

Foreign affairs expert Muhammad Mahdi lamented that the first phase of the CPEC could not be completed because of ‘ineptness’ of the previous government.

He said all Pakistani political parties needed to make a commitment with the CPEC in their respective manifestoes for the next elections so that the project could not be harmed again whichever party comes into power.

About anti-CPEC propaganda, he said the western world is also being taken on board on the project while PM Sharif made it clear during a reception by the US ambassador that Islamabad would go along with the country that would come forward and help Pakistan at this critical time.

He said China has so far given Rs30 billion aid, the largest by any country, for flood victims, while it’s also expected to announce the biggest relief for Pakistan at the Paris Club meeting.

Jawed Salim Qureshi, chairman of an agro research organization, stressed on transfer of technology in the agriculture sector, particularly in major crops like cotton, wheat, maize, to enhance yield and cut cost of production for Pakistani farmers.

Comparing data on the wide agro-production gap in China and Pakistan, he said older seeds of various crops were failing to give desired results and there’s need for introducing new ones. He said if there was any obstacle in government-to-government agricultural cooperation, then business-to-business cooperation avenues should be explored to accelerate local farm productivity as private sector did not require subsidies but facilitation.

Former additional secretary Nazeer Husssain said CPEC was targeted by the vested interest through thousands of fake articles and called for an effective response to the propaganda. He said civil society must be taken along for sustainable Pak-China relations. He said that Chinese diplomatic and economic help would also be needed for stability in Afghanistan, the route to the Central Asia.

Dr Amjad Magsi from the Punjab University said China’s vision of building a human community with a shared future is gaining support from more countries and will play a vital role in promoting world peace and development.

Dr Khalid Jalal from a UK university regretted that the previous Pakistan government showed a lack of commitment with CPEC. Referring to Army Chief Gen Qamar Javed Bajwa’s trouble-shooting role in relations between the two countries, he said Islamabad could not yet decide on the post-Bajwa scenario with regard to sustainability of the CPEC.