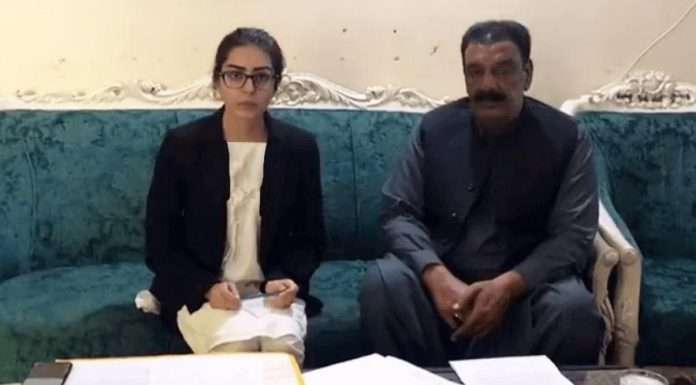 On October 8, a video emerged on social media in which Mazari could be seen arguing with Karachi Company police station SHO Irshad Cheema for allegedly torturing a man. She had later lodged a complaint with the senior superintendent (SSP) of police (operations) for registration of a case and taking department action against the SHO.

In her complaint, Advocate Mazari had said that on October 7 she visited the G-9 (Karachi Company) police station and witnessed a “series of illegal, unconstitutional and outright criminal activities, including bribery and torture by the SHO and one of his associates in civilian clothes.”

She had said she found “the SHO torturing a young man. He was stepping with his boots on the face of the man who was lying down on the floor screaming in pain.” Mazari had said, adding that after having been spotted, the SHO hurriedly came out of the room and locked it.

The SHO was asked to identify the man so she could lodge a complaint with the police authorities. However, he had refused to give any details about him and also did not allow her to meet the man in custody, the complaint said.

“Therefore, the SSP is requested to take strict penal, criminal and departmental action against the SHO and his accomplices and register a case against them,” Mazari had pleaded.

The Islamabad police later said the officer was suspended and an inquiry was ordered into the incident.

Today, Mazari alleged that a pair of individuals — 16-year-old Wajahat Saif and 17-year-old Fahad Aftab — were tortured by the SHO on Oct 7 and shared a video with the former’s father, Chaudhry Saif.

She said the inquiry report against the SHO found him guilty, but the police were not sharing it. “SSP Operations Malik Jameel Zafar has flat-out refused, [saying] ‘that we don’t have permission to give the inquiry report’,” she added.

“There is a massive cover-up ongoing and IG Islamabad is asleep. This is heinous conduct on the part of even the most senior police officials,” she tweeted, adding that the boys had been sent to Adiala jail “after being falsely implicated in old FIRs against unknown persons”.

Saif’s father said the boys were on their way to G-9 area when their motorbike ran out of fuel and that’s when police officers in civilian clothes arrested them, took them to the police station and tortured them.

“After that, we kept on pleading for two to three days but they (the police) did not release them, following which, we filed an application on which we still have no update,” he said, adding that the boys did not have a case against them. He requested the Islamabad police chief to “stop this injustice”. In a later tweet, the lawyer alleged that the police were refusing to register a first information report. “The audacity of ICT (Islamabad Capital Territory) police to cover up custodial torture makes my blood boil,” she added.

Addressing Islamabad Inspector General of Police Akbar Nisar Khan, she said: “Your police force is out of control and you seem to either be unaware or complicit in this cover-up. These are poor people with no resources so you think you can perpetrate injustices against them and no one will help them,” adding that such alleged treatment was “cruel and illegal”. Her lawyer, Advocate Usama Khawar, with whom she is pursuing the case, said that the law was clear and an SHO was bound to register an FIR if anyone gave information about a cognisable offence to the police.

“Legal duty of the police to register an FIR without any excuses. Non-registration is an offence and can be ground for disciplinary action. Is the law not applicable to ICT police?”