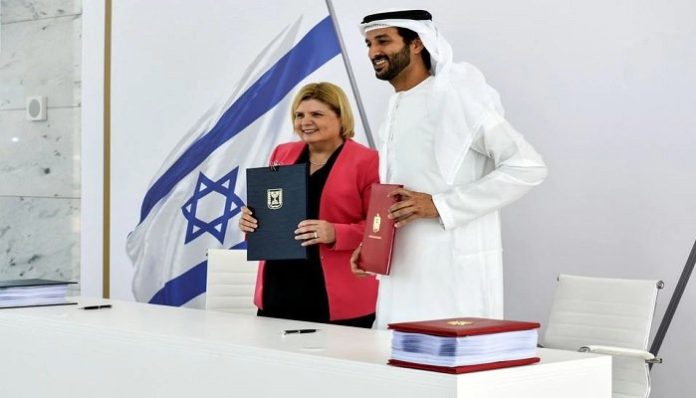 Israel signed a free trade agreement with the United Arab Emirates on Tuesday, its first with an Arab state and one which eliminates most tariffs and aims to lift their annual bilateral trade to more than $10 billion.

Tariffs will be removed or reduced on 96% of goods traded between the nations. The UAE predicted the Comprehensive Economic Partnership Agreement would boost annual bilateral trade to more than $10 billion within five years.

Tariffs will be reduced on goods including food, medicine, diamonds, jewelry, fertilisers, and other chemicals.

Most duties are to be eliminated immediately, while others will be removed over 3-5 years. Some products will still be subject to customs tariffs but at a lower rate.

Emirati trade minister Thani Al Zeyoudi said the deal had written “a new chapter in the history of the Middle East”.

“Our agreement will accelerate growth, create jobs and lead to a new era of peace, stability, and prosperity across the region,” he wrote on Twitter.

Barbivai said in a statement the expected strengthening in trade, removal of barriers and promotion of new business opportunities and partnerships would form a “solid foundation” for the “joint path” shared by Israel and the UAE.

The trade agreement defined tax rates, imports and intellectual property, which would encourage more Israeli companies to set up offices in the UAE, particularly in Dubai, said Dorian Barak, president of the UAE-Israel Business Council .

The council predicts there will be almost 1,000 Israeli companies working in or through the UAE by the end of the year.

“The domestic market doesn’t represent the entirety of the opportunity. The opportunity is really setting up in Dubai, as many companies have, in order to target the broader region,” Barak told Reuters by phone.

The agreement was signed amid Israeli-Palestinian violence.

The UAE foreign ministry on Monday condemned what it called a “storming” of the Al Aqsa compound in Jerusalem by “extremist settlers under the protection of Israeli forces”.

That appeared to refer to visits by thousands of Jews, who revere the site as a vestige of their two ancient temples, on the day marking Israel’s capture of Jerusalem’s Old City in a 1967 war.

Some visitors prayed and held up Israeli flags which police said resulted in their removal.

Al Aqsa, which is also the third holiest site in Islam, is in East Jerusalem’s Old City which Israel has annexed but is not recognised internationally.

The deal marked the UAE’s second free trade pact after it signed a similar accord with India in February. It is in trade talks with several other countries, including Indonesia and South Korea.

The UAE has sought to strengthen its economy and status as a major business hub following the coronavirus pandemic.

Israel and the UAE established ties in September 2020 in a US-brokered deal that broke with decades of Arab policy that had called for a Palestinian state before ties with Israel.