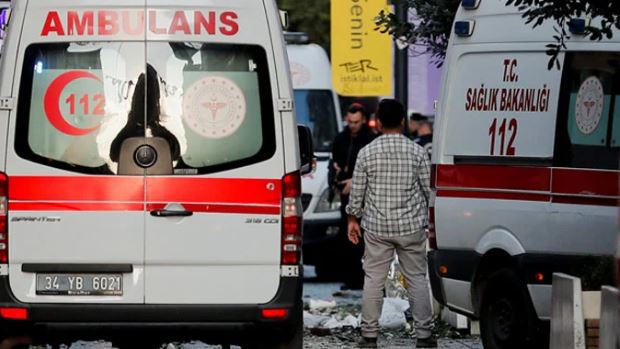 Monitoring Desk
ISTANBUL: The video was short, but graphic. Sunday-afternoon crowds suddenly scattered by the sound of an explosion. Orange flames and black smoke rising into the air as people ran for their lives.

Hours later, Istiklal Street is busy again. Two tables have been placed on either side of the street, draped with cloths and heaped with red carnations. These islands make people slow down, and pause to look. The videos showed them exactly what happened here on Sunday. The mood now is solemn.

Already, the grey pavement tiles have been scrubbed clean. At ground level the physical signs of the carnage have been swiftly removed.

A low velvet-covered podium has replaced the shattered bench where police believe the attacker hid the bomb before walking away. But when you look up, shattered windows tell the story of what happened here.

Istiklal Street often feels to me like the very definition of life. It is crowded from morning until night, and you often have to weave your way through groups of strolling shoppers.

It is a real focus for tourists, who come to buy boxes of sweet baklava from traditional shops. The clanking sound of a traditional Turkish ice cream seller is never far from your ears.

It is a focal point for Turkish families, too, to watch the street entertainment, and to shop. The alleys that radiate out are filled with bars and restaurants. It is the main artery of the beating heart of this city.

This is not the first time that Istanbul has known terror. Between 2015 and 2017 more than five hundred people were killed in attacks in Turkey by Islamist militants and Kurdish separatists.

Even Istiklal Street suffered a devastating suicide bombing. In the hours after yesterday’s explosion, old footage from that blast started to circulate online once again.

Turkey’s Interior Minister Suleyman Soylu said initial findings showed the PKK Kurdish separatist group was behind Sunday’s attack, though no organisation has yet claimed responsibility. He promised Turkey would “retaliate soon” against whoever carried out the bombing.

The PKK – the Kurdistan Workers’ Party – denied any role in the blast, saying “we will not directly target civilians”.

The blast has created a fresh nervousness on the streets of Istanbul. “I believe in what the minister says, 100%,” says Burhan Kizilkaya. He runs a small restaurant just off Istiklal Street. “It’s clearly a terrorist attack. They killed innocent people, and children. They should all be executed. I think though security here is much tighter, thanks to our government, so I don’t think the darkest times will return.”

Nesim Celik is a Turkish citizen, but with Kurdish heritage. He doesn’t believe that the PKK were responsible for the attack.

“Now everybody is concerned that the period of heavy violence might come back here,” he tells me. “They say as the elections approach next June the bombs will return. I didn’t feel like that. But after yesterday, now I do.”

Memories here are still fresh, and raw. Mecit Bal’s son was in the street outside their small family kiosk, just 20 metres away from the blast. The force knocked him to the ground, his father said.