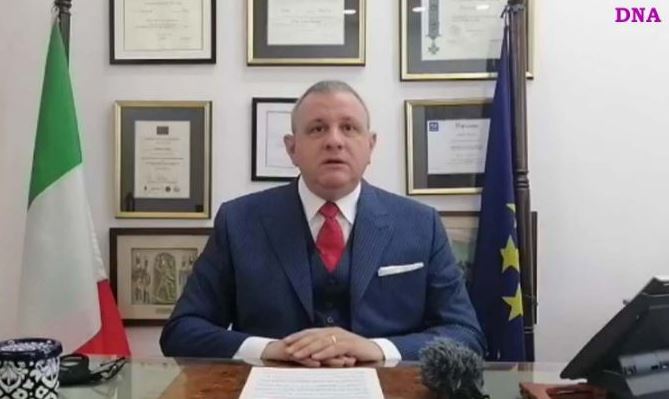 ISLAMABAD, Jun 14 (DNA): Ambassador of Italy to Pakistan Andreas
Ferrarese on Tuesday said that Italy was investing in a project worth
€1.5 million for olive cultivation and growth in Pakistan.

The Ambassador said that Italy had always played a vital role in helping
Pakistan to develop olive cultivation and technical expertise.

The “Olive Culture” project worth €1.5 million shall be executed in 26
months in suitable areas by CIHEAM Bari in cooperation with the Ministry
of National Food Security and Research (MNFS&R) through the Pakistan
Oilseed Department. It represents a continuum with all the work done by
Italy in the past, with a holistic approach encompassing all stages and
stakeholders.

The Ambassador hosted an event to highlight Italy’s contribution to the
promotion of Olive and Olive Oil and its Value Chain in Pakistan,
through the technical support of the Italian Agency for Development
Cooperation – AICS in Pakistan.

He said that Pakistan had a lot of potential for olives and the country
could earn foreign exchange by increasing olive production and using it
for commercial purposes.

He further said that fair trade was going on between the two countries
at present. Pakistan’s overall exports to Italy were worth $ 763
million, its overall imports from the country were worth $754 million.

Andreas Ferrarese said that Italian olives were the best in the world in
terms of quality. Pakistan could import olives from Italy which were
very good for human health, he said. He said that the Pakistani business
community in Italy could play a very important role in that regard.

Olives, he said, were an integral part of the entire Mediterranean
civilization without which life and culture would be incomplete. He said
that olives were a special gift of our Mediterranean culture, which was
a part of the culture of the region.

Andreas Ferrarese said that olive is an important part of our food,
weddings and festivals. Similarly, olives were of special importance in
the Middle East and other regions and civilizations. He said that the
importance of olives is also mentioned in the holy religious books
Quran, Gospel and Bible.

The Ambassador said that Italy had always supported Pakistan’s journey
in the field and “We are happy to continue with an aim to develop a
sustainable, modern and rich olive culture in Pakistan.”

He said that it would not only provide quality edible oil for the
Pakistani people but also help reduce the import bill of the country.
Rather, he said, “We look forward to the times when Pakistan would be
among leading olive-producing and exporting countries in the world”.

Project Coordinator, CIHEAM Bari International Olive Culture, Marco
Marchetti said that Italy would play an important role in the
cultivation and processing of olives in Pakistan.

He said that there was a need to work more on the olive supply chain in
Pakistan, the lack of which at present could not reap the benefits in
Pakistan.

He said that qualified human resources, technical assistance, quality
and safety standards, reference laboratories for oil certification, and
phytosanitary labs were much needed in Pakistan to establish a full
value chain of safe and highly nutritious tasty food that improved
health dramatically.

He said that Olive Culture was an inclusive project through gender and
youth, agro-tourism and culture.

Marco said that olive contributed to mitigating climate change impact as
a smart tree against soil erosion and water consumption, inducing a low
carbon footprint. These were added value benefits for achieving the
desired results in the sector in Pakistan, a country which had the
potential to be a world leader in olive production, he said.

He said that Italian technical assistance for Pakistan in the olive
growing sector started 40 years ago with adaptive research schemes to
assess the viability for modern cultivation of the crop in Pakistan (in
the 80s and 90s).

It was followed by the launch of the first significant olive crop
investment (2012-2015) through the Pakistan Italian Debt Swap Agreement
(PIDSA), resulting in 2000 hectares of plantation in marginal and
wastelands, he said.

He said that in 2016, olive cultivation was introduced in the Programme
for Poverty Reduction sponsored by the Italian government and executed
by the Pakistan Poverty Alleviation Fund (PPAF), through which three oil
extraction units were being established on a public-private partnership
basis with the farmer communities.

More recently, in March 2022, a key project “Olive Culture Holistic and
Multi-Professional Mechanism for a Pakistani Olive Oil Value Chain”, has
been launched. Marco said that the project was funded by the Italian
government and implemented by the Mediterranean Agronomic Institute of
Bari – CIHEAM.

Director of AICS Office in Islamabad, Emanuela Benini, said that the
building of a multi-professional Olive and Olive Oil Value Chain (from
soil to plate) shall ensure high quality – the paramount condition to
good income. DNA