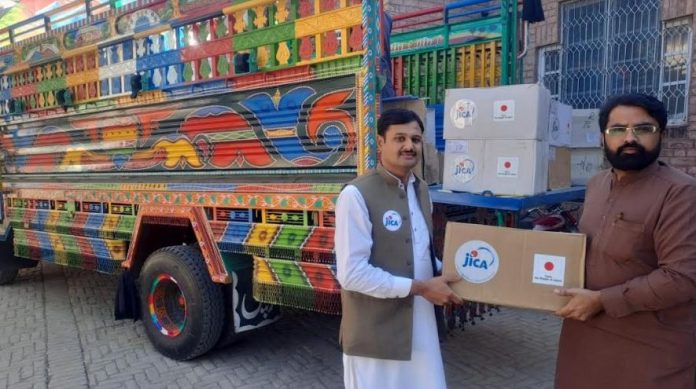 Islamabad, Dec 27: /DNA/ – Japan International Cooperation Agency (JICA) Pakistan Office extends its support to the flood affected districts of Punjab and Khyber Pakhtunkhwa (KP) Provinces by providing in total 9000 mosquito nets, 80,000 ORS and 400,000 water purification tablets. On the request of Government of Punjab and KP, the Government of Japan and JICA Pakistan Office decided to extend its support to the worst affected districts of both the provinces. In Punjab the target districts are Dera Ghazi Khan and Rajanpur. In KP, the target districts are Kohistan, DI Khan, Tank, Nowshera and Charsada. The expected beneficiaries of this support are around 80,000 families with pregnant or lactating women and children under five.

According to the Post Disaster Need Assessment (PDNA) on Pakistan Floods 2022, around 650,000 pregnant women are facing challenges in getting access to maternal services, nearly 4 million children lack access to health services and substantial increase of communicable diseases such as diarrhea, malaria, dengue and cholera has been observed. In this regard particular attention should be given pregnant and lactating women and children under five. JICA support will help these vulnerable segments of the society and will also help in reducing the outbreaks of communicable diseases.

JICA is utilizing its ongoing technical cooperation projects “The Project for Strengthening Maternal and Newborn Health Care in Punjab” and “The Project for Strengthening Continuum of Care for Mothers, Newborn and Child Health in Primary Health Care Settings in KP” to provide its above said support to flood affected districts of both the provinces.

Prior to this, the Government of Japan provided USD 7 million as an emergency grant to address the immediate impact of the floods in September 2022.  In addition, the Government announced another grant assistance of USD 38.9 million to Pakistan as part of Japan’s supplementary budget to deliver life-saving aid to the flood victims on December 2, 2022.