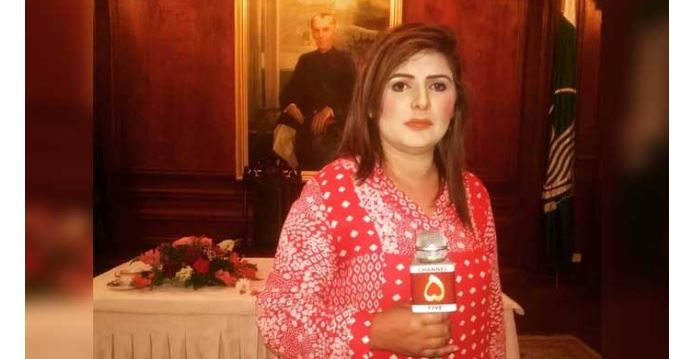 SADHOKE, Oct 30: Sadaf Naeem, a journalist working for a private news channel, Sunday died after being crushed under PTI’s container while its long march was headed toward Kamoke from GT Road Lahore.

Following the incident, the PTI Chairman Imran Khan announced halting the march for the day and said it will continue tomorrow.

Speaking to the participants, Khan said that the march was supposed to move towards Kamoke, Gujranwala, today. “However, due to the tragic incident, we will stop the march immediately.”

Khan also sent his condolences to the family of the deceased and said that he would pray for the departed soul. After the incident, the march was stopped at GT Road and Imran Khan stepped out of the container.

According to rescue officials, the reporter slipped and fell under Khan’s container while she was climbing down from the one she was standing on already. Prime Minister Shehbaz Sharif took to Twitter to share his grief over the incident and extended his condolences to the journalist’s family.

“Deeply saddened by the death of reporter Sadaf Naeem after falling from a long march container. Cannot feel sad enough over this tragic incident. Heartfelt condolences to the family. Sadaf Naeem was a dynamic and hardworking reporter. We pray for patience for the family of the deceased,” he tweeted. Punjab’s Chief Minister Chaudhry Pervaiz Elahi has regretted the incident and sent his heartfelt sympathies and condolences to Sadaf’s family.

“I’ve seldom seen reporters as courageous and hard-working as Sadaf. A brave girl. Her eyes lit up after I introduced her to Imran Khan as the bravest and most hard-working reporter. Who knew that the meeting will be the last one. May God have mercy on her,” Fawad wrote in his tweet.