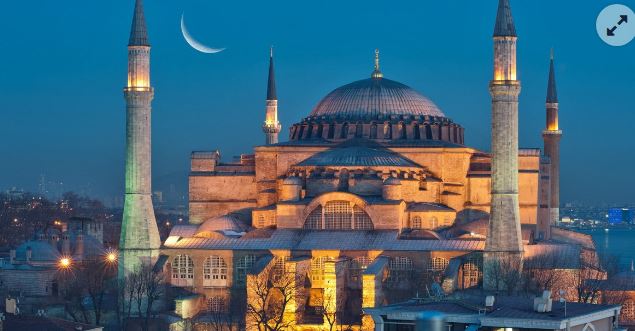 Muslims turn important and symbolic structures in the lands they conquered into mosques. This tradition, which points to the dominance and existence of Islam, has an important place in preserving the dignity of Islam.

Architectural works are not only an element that affects the time and the environment, but also go through a continuous process of development, transformation and existence. Imprisoning and anchoring them in the century in which they were put on the ground would mean wasting a great amount of knowledge we could have gained from them.

Structures dating back centuries that survived and continued to exist are in reality centuries-old adventures.

It was a centuries-old tradition of Islamic states to turn the city’s largest, iconic structure in the conquered lands into a mosque.

Because this transformation has an important place in showing the dominance and existence of Islam and reflecting the appropriation of the land obtained.

Ottoman civilization always followed a respective style while turning churches into mosques, as when turning a church into a mosque, minimal physical interventions were made, and the figures were not destroyed in a way that would not interfere with the worship of the congregation.

In fact, the sensitivity of the Ottomans in converting a church into a mosque is clearly read in the conversion of Hagia Sophia into a mosque after Fatih’s entry to Constantinople in 1453.

So much so that, although Hagia Sophia is a huge symbol, Fatih Sultan Mehmet did not even change the name of Hagia Sophia while transforming the church into a mosque. Physical intervention at the mosque was also kept at minimum levels.

Ottoman wisdom and morality preferred to replace Hagia Sophia with additional pieces such as the altar and minaret, and the relics brought from the holy lands, instead of destroying the knowledge that it was a church for a while.

History of Hagia Sophia before the Conquest

Centuries before the conquest of Istanbul by Fatih, Byzantine Emperor Constantine I built the first Hagia Sophia in the period when Christianity was just spreading.

This first Hagia Sophia, which has a basilica plan, was destroyed in a fire at the end of an uprising due to its wooden roof structure, and no part of it could reach today.

Basilica plan was the type of plan that is frequently encountered in church architecture and resembles a cross in plan.

Some ruins such as stairs and columns, which show the entrance to the temple, were discovered later as a result of research from the second Hagia Sophia.

The last reconstruction before the conquest

After the tragic fate of the Second Hagia Sophia, l. In the 6th century, Justinian instructed the famous architects of the era to build an even bigger church than the previous ones, and the most basic form of Hagia Sophia, which will survive today, was revealed.

The adventure of Hagia Sophia after the conquest

When Fatih conquered Istanbul, he saw Hagia Sophia in a neglected and miserable state due to the financial difficulties of Byzantium. He immediately began to strive for the cleaning and repair of Hagia Sophia and its transformation into a mosque as a place of worship.

After these first arrangements and repairs, Fatih turned Hagia Sophia into a mosque and had the first minaret built on semi-domes. During the repair in 1574, this minaret was removed from Hagia Sophia.

The most important contributions to Hagia Sophia were made by Mimar Sinan. Sinan repaired the minarets of Hagia Sophia and, in addition, added buttresses to the structure, which was in danger of collapsing due to the earthquakes that shook the Istanbul area. The fact that Hagia Sophia and its strengthened structure have reached today is partly because of the fine touches of Mimar Sinan to the mosque.

The Chief Architect did not only limit himself to changes in the building itself, but also removed the ugly buildings, slums, and ruins surrounding it, cleaned the courtyard, and opened a wide square, which highlighted Hagia Sophia as a symbolic element.

Like it can be seen in Hagia Sophia too, the Ottoman civilization makes transformations by respecting the past of the structures in the places it conquered. It prioritizes development by reconstruction and repair, not transformation by destruction. Unfortunately, the same sensitivity is not shown in Islamic works in European countries.

Numerous works of symbolic importance in the Balkans and Europe, which can shed light on the period in terms of architecture, undergo an intense transformation until the traces of the original are incomprehensible.