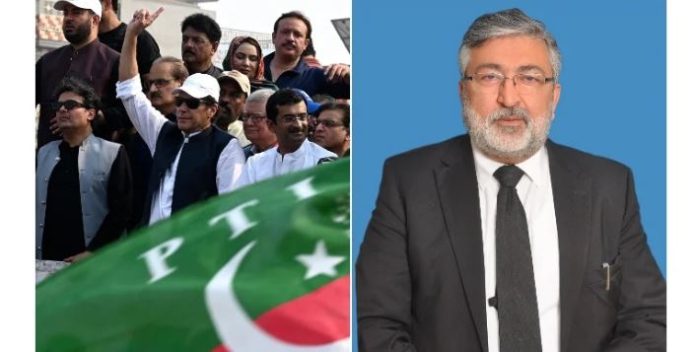 ISLAMABAD: JUI-F’s Senator Kamran Murtaza Tuesday filed a constitutional petition in the Supreme Court against the PTI’s long march, as it continues to move toward its final destination in Islamabad.

The senator has included the federal and provincial governments, PTI Chairman Imran Khan, and his party in the petition as respondents, asking the top court to ensure the safety of citizens as its long march approaches the capital due to security concerns.

In October, the federal government had also filed a contempt of court plea against the PTI chairman in the Supreme Court over his long march.

In its petition, the government said, “Imran Khan is making announcements to attack Islamabad”, which it claimed was a violation of a court order. It urged the apex court to direct the PTI chief to ensure the implementation of its orders related to protests and sit-ins.

The petition by JUI-F has asked the SC to direct relevant governments to issue guidelines for conducting political rallies and order the Khan-led party to not exceed the designated number of days approved for its jalsa and sit-in.

JUI-F’s petition has been filed a day after the PTI wrote to the Islamabad High Court seeking permission to hold its jalsa and sit-in in the federal capital and also sought security provisions for marchers.

Senator Kamran, in his petition, wrote that the PTI’s intentions are to create chaos and panic in the country — particularly in the federal capital— through its long march through “force” and “illegal arms”.

The senator also indicated towards an alleged audio leak of PTI leader Ali Aim Gandapur who was heard talking to a man named Asad Khan about bringing arms and ammunition to the capital, and causing trouble in the process.

The petition also carried an attachment of the audio call’s transcript.

It further mentioned that the governments of Punjab, Khyber Pakhtunkhwa, Azad Jammu and Kashmir, and Gilgit-Baltistan are all led by PTI, and given the past conduct of the party chaos and trouble is expected to ensue.

The senator shared fears that this situation could also be misused by miscreants, terrorist groups, and militants. He also mentioned that the PTI has stirred chaos during its rallies in Islamabad in the past.

The petition added that despite assurances and undertakings by the party’s leadership of limiting the rally to a designated place, they moved toward D-Chowk causing havoc across the capital.

The senator also mentioned that the PTI chief has previously also violated the law during his party’s 2014 sit-in that troubled citizenry across Islamabad, particularly the red zone.