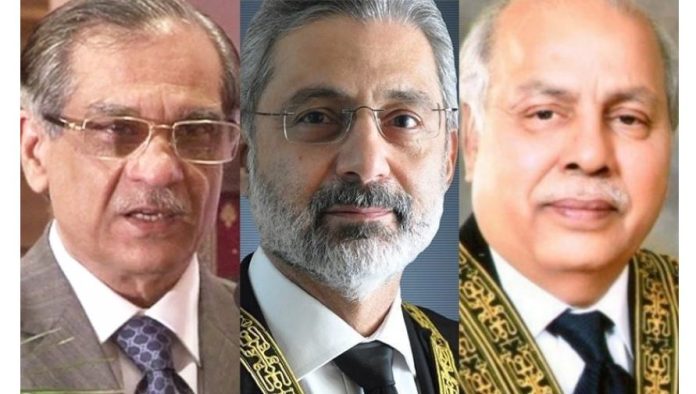 ISLAMABAD, MAY 28: Justice Qazi Faez Isa, in a letter addressed to Chief Justice of Pakistan (CJP) Umar Ata Bandial, has accused former top judges Saqib Nisar and Gulzar Ahmed of deliberately disregarding merit in the appointment of Supreme Court (SC) judges, as he called for more transparency in the process.

The letter, dated May 25 (Wednesday), was written by Justice Isa after “much reflection and … because legitimate concerns of quite a few members of the Judicial Commission of Pakistan (JCP) continue to be ignored”. It added that bar associations had also expressed those concerns.

It said that an important factor in the appointment of judges to the apex court was whether they had the “requisite ability and determination to resist and repel unconstitutional acts, and the courage to preserve, protect and defend the Constitution”.

Justice Isa said that a longstanding practice was to appoint high court chief justices to the SC since they would have attained the necessary judicial experience, administrative understanding and skills to interact with the executive.

He explained when that practice could not be followed then appointments are to be made after “due deliberation and for a good reason”. He added that in such cases, the most senior high court judge was appointed instead.

“The selection process was also made inclusive, and provided for the participation of different stakeholders, and matters were made open and transparent,” he said.

Justice Isa said that this process for the selection of judges was disregarded by former CJPs Saqib Nisar and Gulzar Ahmed.

“This was done by creating an artificial polarity — seniority versus merit; the Constitution does not stipulate this. These chief justices then assumed that seniority and merit were mutually exclusive, and by applying their self-justifying specious logic, unilaterally nominated candidates, whose merit they proclaimed.

“This resulted in the bypassing of chief justices and senior judges of the high courts. At times it was also asserted that their chosen nominee had decided a very large number of cases, but we all know that the workload on the judges of the Supreme Court is less than that on the judges of high court, which negates this sophistry,” the letter said.

He said Justice Nisar had tried to justify the nomination of a junior Sindh High Court (SHC) judge to the SC by asserting, without proof, that the chief justice and other senior judges did not want to be appointed. “However, the concerned Chief Justice and the senior judges tell a different story. … Therefore, to assert [and to do so without proof] that they had declined was disingenuous,” Justice Isa said.

Similarly, he said Justice Ahmed had also bypassed the SHC chief justice and senior judges for the reason that they did not meet the merit test, without having first established the criteria and the methodology to gauge merit.

“However, a few weeks later chief justice Gulzar Ahmed proposed the same chief justice for appointment as an ad-hoc judge to the Supreme Court. Had he now miraculously passed the elusive merit test?” the letter said.

Justice Isa argued that appointing junior judges to the SC before they were ready did not serve either their interests or the institution’s. Instead, such judges are “deprived” of the opportunity to serve as a high court chief justice and gain the “rich experience” from that position, Justice Isa explained.

“The chairmen of the commissions (the CJPs) took it upon themselves to unilaterally select judges for appointment to the Supreme Court and their chosen nominees were presented to the members as fait accompli to either approve or reject them,” Justice Isa said, adding that this contradicted the Constitution.

Among other topics addressed in the letter, Justice Isa criticised the JCP’s secretary of manipulating matters and political cronyism for the PTI, lamented that the purpose of a committee formed after January 6 had still not been communicated and questioned the need for secrecy in the JCP’s meetings.

Justice Isa said public confidence in the judiciary must be ensured, because without it decisions are bereft of authority and credibility.

He said any impression that external forces or considerations impacted the appointment of judges needed to be dispelled.

“To unilaterally nominate judges and force through their selection, oftentimes by a single vote, does not accord with the spirit of the Constitution. When tried and tested longstanding practices are dispensed with, and this is done without substituting it with criteria for the selection of judges, encourages those desirous of career progression to cultivate relationships (jobbery); and when this happens, it is an abomination,” the letter said.

Justice Isa ended his letter by saying that the people had bestowed the responsibility on the JCP to select judges in accordance with the Constitution.