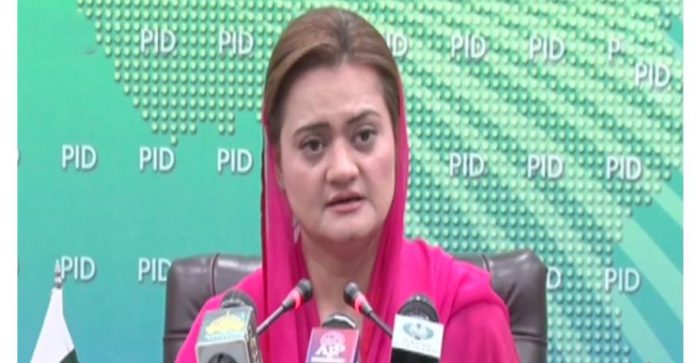 ISLAMABAD: Information Minister Marriyum Aurangzeb on Saturday said the government will not negotiate with PTI Chairman Imran Khan until he “accepts defeat” and corrects his language and behaviour.

Aurangzeb’s remarks came after Imran, in a press conference earlier in the day, said he was open to “every kind of negotiation” if it led to fair and transparent elections.

The information minister, in her own press conference in Islamabad, was asked why the government had a problem accepting Imran’s offer. To this, she replied: “Let him (Imran) admit defeat first at least. He accepts defeat and changes his behaviour and his language then he will see we won’t disappoint him.”

Aurangzeb said the PTI chairman would have to seek forgiveness and answer for his “language, behaviour and the injustice done with the people of Pakistan for four years”.

“We can’t forget it, and every injustice, whether with the media or the people or parliamentarians or political opponents, was a loss to Pakistan,” she added.

The information minister criticised the PTI chairman for blowing off the then opposition’s calls for negotiations on the economy, Covid-19, Financial Action Task Force and national security issues when he was in power himself.

“You won’t be given an NRO (National Reconciliation Ordinance). We can’t do negotiations with you if they’re based on threats and dictation.”

Responding to the PTI chief’s claim that negotiations were not possible until a date was given in June for elections, Aurangzeb said: “I’m giving you the date of elections. Write it down: August 2023. Imprint it on your mind and heart.”

She said the government and its coalition allies would give the next election’s date after completing their constitutional term.

“Listen with both ears. No one will fall in your threats, dictation, cursing or misbehaviour. Change your behaviour. Wait for elections. Learn to wait,” she said.

Aurangzeb told the PTI chairman to “stay home” if he wanted a dialogue over elections. “If you set out of your house with weapons, bullets, sticks and with an announcement of a bloody march then worse will happen than what happened before,” she warned.

The information minister called on Imran to desist from “dividing the nation and spreading instability and chaos” in society.

She said dialogues happened when both the political parties had the intention as well as behaviour to engage, and not when there was “fault, fakeness and hypocrisy”.

Aurangzeb told Imran to not initiate any organised social media campaign against the police. “If there is any movement against police on social media … then you will have to suffer the consequences,” she added, further claiming that there would be “zero tolerance” shown.