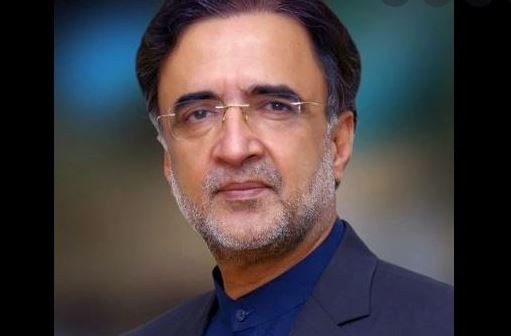 Inaugurating the All Parties Consultative Conference on Kashmir issue titled “The Way Forward” in Islamabad, he said the entire Pakistani nation is standing by their Kashmiri brethren in their just struggle for getting liberation from Indian clutches.

“India is trying to bring a Hindu Chief Minister by changing the proportion of the population,” he added.

The President of Azad Kashmir said that India was persecuting the minorities inside its country.

He said that the situation was not normal in Jammu and Kashmir under the illegal occupation of India.

He said that the verdict of the court on Yasin Malik was a violation of international law, which speaks volumes of ineffectiveness of the UN.

Sardar Tanveer Ilyas said that the conviction of Yasin Malik by an Indian court is a question mark for international human rights organizations.

Kashmiris bury their martyrs under the green crescent flag.

Former Prime Minister of Azad Kashmir Raja Farooq Haider Khan said that the sacrifices made in Kashmir are unforgettable.

Indian oppression could not dampen the spirit of independence of Kashmiris, he said.

Former Prime Minister Azad Kashmir Abdul Qayyum Niazi underlined the need  to work out a plan of action on the Kashmir issue.

Additional Foreign Secretary Mumtaz Zehra said that the number of forces is being increased to suppress the voice of Kashmiris, India is pretending to the world that the situation in Occupied Kashmir has returned to normal.

“Change in population is a violation of international law. We rejected the report of the zoning commission on Occupied Kashmir,” she said.

She said Yasin Malik was punished illegally, India could not suppress Kashmiris by force.