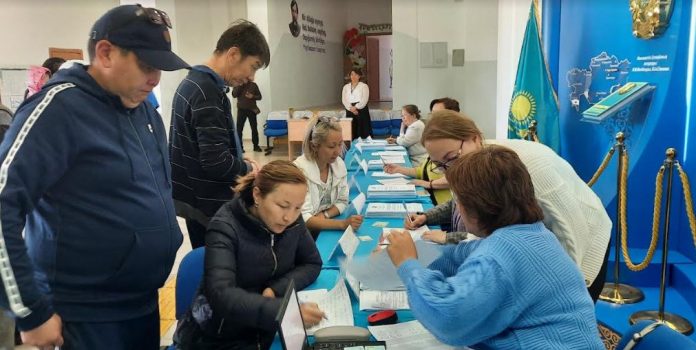 NUR-SULTAN, JUN 5 /DNA/ – The people of Kazakhstan on Sunday went to a referendum in order to determine the future of their country. The referendum exercise drew huge interest from all and sundry. This scribe visited a number of polling stations in the Capital Nur Sultan and the suburban areas. A brief chat with the people at the each polling station showed how keen were the people to have the new system in place.

International observers noted a high turnout at the polling stations across Kazakhstan. Vice President of the International Turkic Academy Fuzuli Majidli said the turnout at the polling stations in Nur-Sultan was quite high. “The Central Election Commission and other state bodies comply with all regulations. The Turkic Academy observes the referendum with high interest,” Majidli told the press briefing today, saying that no violations were recorded.

The former President Nur Sultan Nazarbayev has made few public appearances since the crisis, but cast his vote in the capital Sunday, after expressing support for Tokayev and the changes.

As part of the delegation of international observers, the International Turkic Academy visited nine polling stations in the capital of Kazakhstan in the first half of the referendum day and it will continue its observing mission until the closure of polling stations at 8 p.m. According to Majidli, the Turkic speaking community is closely watching the process that is now taking place in Kazakhstan.

Likewise other international observers were taken to various polling stations. All of them were unanimous in the post-visit views that turnout was quite encouraging.

Similarly, foreign journalists who visited other areas also reported a high turnout and great enthusiasm among the people. A sizable number of youth also flocked to the polling stations in order to cast their votes.

People while talking to media people told that they had come to vote for a change. They hoped the referendum shall bring more progress and development to their country and people alike.

The Election Commission made elaborate arrangements in order to ensure smooth polling. At each polling station observers nominated by various political parties were there to observe and monitor the polling process.