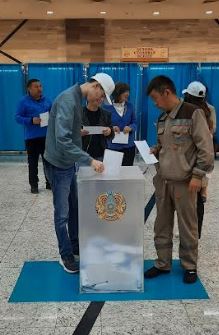 NUR-SULTAN – Kazakhstan’s President Kassym-Jomart Tokayev was among the first to cast vote in the capital’s Schoolchildren Palace.

“Today is an important historical day for our country, indeed. People are making a fateful decision. There is no compulsion,” said Tokayev.

He said the constitutional amendments that the nation is voting on today envision significant changes for Kazakhstan, which saw its last referendum in 1995 when it adopted the current Constitution.

“In essence, the paradigm of relations between the state and the society is changing, human rights are coming to the forefront. This is extremely important. In the Constitution, the status of the Human Rights Ombudsperson acquires a new status and a new meaning. The Ombudsperson will be able to appeal to the Constitutional Court, and this body is also new for us,” said Tokayev after voting, as quoted by Kazinform news agency.

“The guiding principle is honest service to our people, strict adherence to our Constitution. We have a goal and we have a lot of work to do. All of us must work for the good of the country. There are many threats to the security of our country. So we must be vigilant in this direction,” said Tokayev.

The national referendum on constitutional amendments displayed an impressive level of political engagement among young people, said Faizullo Barotzoda, the group coordinator of the Parliamentary Assembly of the Collective Security Treaty Organization (CSTO).

For many young people in Kazakhstan, this is the first referendum that they are eligible to participate in. The last referendum in the country was in 1995 when the people voted for the current Constitution.

He echoed his colleague’s opinion from the International Turkic Academy on the impressive turnout at the polling stations across Kazakhstan and said that the overall organization of the referendum is held in an orderly fashion. Faizullo stressed that they witnessed no violations at the 10 polling stations their delegation visited.

“I would also like to note a high turnout among young people and their incredible political awareness,” added Faizullo.

According to Faizullo, this referendum embodies a bold political step in the history of the development of Kazakhstan. “In the first 30 years, the focus of Kazakhstan’s main policy was on the social sphere and the economy, now it’s time for political reforms,” he said.

“We have not received any information neither about violations of the referendum law nor violations of public order. And this is good,” he said.

On Saturday, the mission toured the polling stations in the Akmola Region to see how preparations are going on for the referendum.

“Looking ahead, I can say that Kazakhstan and its people arrived at the referendum vote in full readiness. In general, we did not find any violations during the information campaign ahead of the referendum day, in the overall organization of the referendum, as well as in the work at polling stations,” said Anfimov.

In the 2019 presidential elections in Kazakhstan, CIS also sent their mission to observe the vote.