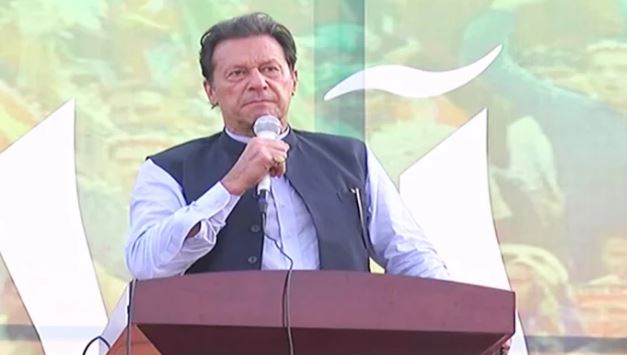 SIALKOT: PTI Chairman Imran Khan Wednesday dubbed his “Azadi March” as the “biggest freedom movement” in the country’s history after getting a boost from the top court’s decision.

“My heart believes it will be the biggest freedom movement in the history of Pakistan. We will continue our struggle till the nation gets its rights via elections,” Khan told a party event in Sialkot.

The long march to Islamabad will kick off on October 28 (Friday) from Lahore’s Liberty Chowk in the morning despite the government’s repeated warnings to Khan.

Before it approached the top court, the government issued repeated warnings to the PTI chief, with a top official saying that the authorities would multiply their May 25 policy by 10 if Khan announces another long march.

“The old and the new workers should start mobilising. This is not a war for power or politics, but a war against a foreign conspiracy, which resulted in the installation of thieves on us,” Khan told his supporters.

The ex-prime minister said his long march aimed at securing “real” independence for the nation by defeating the ruling “dacoits”.

“All the sacrifices [for Pakistan] will be in vain if the gang of thieves keeps ruling us. I will depart from Lahore on Friday. This will be Pakistan’s biggest freedom movement.”

Khan said his struggle would continue until the day the nation is allowed to elect its representatives as against the “American slaves who are imposed on us repeatedly”.

Issuing a warning of his own to the federal government, the ex-premier told Interior Minister Rana Sanaullah to gear up as he and his “handlers” would witness a sea of people in the capital.

Lashing out at authorities, Khan said he would hold those accountable who had “mistreated” PTI leader and ex-interior minister Azam Swati.

The PTI leader was taken into custody by the FIA’s Cybercrime Wing (CCW) in Islamabad on October 13 after a case was registered against him over tweets against the army chief. However, he was granted post-arrest bail almost eight days later in return for surety bonds worth Rs1 million.

“They are picking up our social media workers,” Khan said, expressing his anger towards the authorities. “But it won’t just be Imran Khan [in Islamabad], it will be entire Pakistan.”

In response to Khan’s call, PML-N supremo Nawaz Sharif said that the PTI chief would not bring a revolution in the country, rather his long march was just for “appointing an army chief of his choice”.

“The nation has seen his revolution in the last four years of his tenure.”

“Imran Khan, who terms others as thieves, has proven himself to be the biggest thief in history with indisputable evidence of foreign funding, Tosha Khana, and a robbery of 50 billion.”