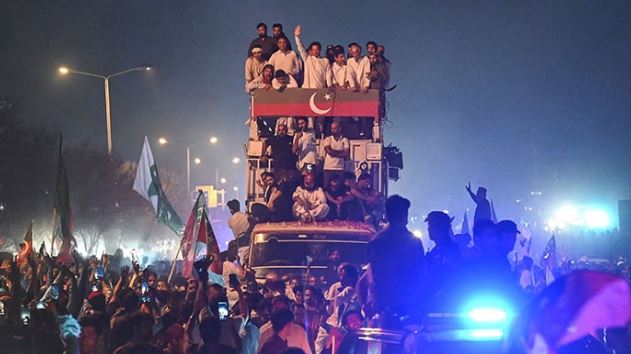 The federal government filed a contempt of court plea against the PTI chairman in the Supreme Court over his long march to the federal capital.

In its petition, the government said, “Imran Khan is making announcements to attack Islamabad”, which it claimed was a violation of a court order. It urged the apex court to direct the PTI chief to ensure the implementation of its orders related to protests and sit-ins.

A day earlier, Khan said PTI will kick off its long march on October 28 (Friday) from Lahore.

The former prime minister said that all party workers, supporters and leaders will gather at Lahore’s Liberty Chowk at 11am from where they will march towards Islamabad.

In his arguments during the hearing, Additional Attorney General Aamir Rahman said that the reports of police and intelligence institutions have been reviewed.

The additional attorney general said that the court had first asked when did the PTI chief give a call for the long march.

He said that the court order came on May 25 at 6pm, while the announcement was made by Khan at 6:50pm and he made the second announcement at 9:54pm.

“The PTI had requested to stage a sit-in at the Srinagar Highway,” he said. “Khan had also announced to go to D-Chowk even before the court order.”

Meanwhile, the court sought a response from Khan over the plea seeking contempt proceedings against him.

“From Khan’s statement, it seems like he was informed about the court’s orders as he said that the SC ordered removing barricades,” the CJP remarked as he summoned the PTI chairman to clarify before the court who said what.

Rehman contended that Khan’s latest call to reach D-chowk is a contempt of court, he said, while referring to the end of PTI’s long march at Jinnah Avenue on May 26.

“Khan crossed the restricted area H9 and reached Blue Area where he ended the rally,” he said.

The additional attorney general further stated that PTI lawyers Babar Awan and Faisal Chaudhry assured the court that they would not cross the restricted area.

At this, CJP Bandial said that Rehman’s argument has some weight therefore it would be better to seek a response from those who assured.