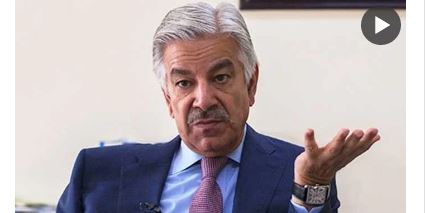 ISLAMABAD: Defence Minister Khawaja Asif Monday maintained that the army chief’s appointment will be done on the prime minister’s discretion.

When questioned if a decision on army chief’s appointment has been made, the defence minister responded in the negative.

Responding to another question about the role of PML-N supremo Nawaz Sharif in the appointment, Khawaja Asif said that it will be done on the “premier’s discretion” and he will decide.

When asked if Nawaz Sharif was not being consulted on the matter, the minister said: “Consultations have not yet taken place on the army chief’s appointment. These are just newspaper reports.”

Last week, PM Shehbaz flew to London — after returning from his visit to Egypt to attend and co-host the United Nations’ COP27 — where he met the PML-N supremo and party’s senior leadership.

It was reported that discussions during these high-level meetings revolved around crucial political matters in Pakistan including the new army chief’s appointment.

Meanwhile, after extending his visit twice following health reasons, the prime minister returned to Islamabad earlier today; however, the decision on the important appointment — according to the defence minister — is yet to be taken.

Commenting on the U-turn taken by PTI chief Imran Khan on the United States-backed conspiracy — in relation to his ouster in April this year following a no-confidence motion in the parliament, Asif asked if it was the first time that Khan has denied something.

“He denies everything. In the past four years, he has talked so much. Has he stood by any of his statements?”

After spending months giving statements about a cypher from the US which allegedly meant to topple his government, PTI chief Khan — in an interview with the Financial Times a day earlier — signalled the desire to mend ties with the US through cooperation with Washington in the future.

The minister added that the former prime minister himself does not remember the state he is in and what he says.

“Yesterday, Imran Khan said that the FIR [first information report] of his murder has not been registered. This man does not know what he says. If some people are ready to believe his words, it is their matter,” Khawaja Asif said commenting on the contradictory statements by the PTI chairman.

It should be noted that the PML-N leadership had resolved to appoint the senior-most officer whose name is at the top of the list that would be sent to the government, as per reports; while incumbent Chief of Army Staff (COAS) General Qamar Javed Bajwa will retire on November 29.