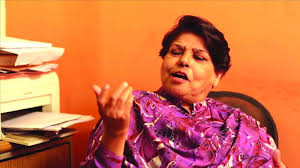 Kishwer Naheed is a renowned Urdu poet who has received several awards including Sitara-e-Imtiaz for her literary contribution towards Urdu Literature. Her written work, spanning for more than four decades, chronicles her experiences as a woman writer engaged in the creative and civic arenas.

Among the speakers, Noor ul Huda Shah (a renowned author) spoke about the unique poetic expressions in the book. The poetry arises in depth thought processes and every verse in the book is relatable as it is the voice of the women who want to contribute in their own unique way.

Shah Muhammad Marri also expressed that Kishwer Naheed is one of the ionic personality to voice the sacrifices of women. Kishwer Naheed is widely acclaimed for her sharp and incisive poetic expression, for being bold and direct, and, for celebrating the universal human struggle for equality, justice and freedom. He also praised the selection of poems in the books.

Tahira Abdullah (a senior woman activist) stated that her poem “hum gunahgar aurtein” has become an anthem for the women universally.