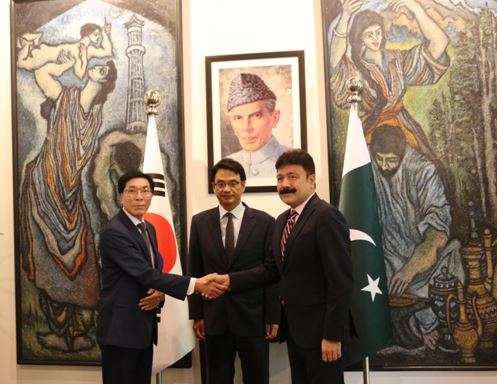 ISLAMABAD, OCT 25 /DNA/ – The Korea Water Resources Corporation (K-Water), which is a Korean governmental agency working on comprehensive water resource development has donated one hundred thousand dollars to the Government of Pakistan to support the ongoing Flood Relief Efforts that have claimed more than 1700 lives across the country, making the total contribution of Korea’s private sector 800,000 USD.

A handing over ceremony for this donation was held yesterday at the Ministry of Foreign Affairs (MOFA) with the participation of the Ambassador the Republic of Korea, Suh Sangpyo, the Representative/Chief Executive Officer of Star Hydro K-Water Pakistan, Mr. Bong Rok Oh, the Director General (EAP) Ministry of Foreign Affairs, Mr. Aamer Ahmed Atozai, and senior officials of the concerned authorities.

Speaking at the occasion, the Ambassador stated that the Government, companies, and the People of Korea have always stood by the People of Pakistan. He added that the donations from the Korean government have exceeded two million dollars and the donations from Private Sector and NGOs were also exceeding eight hundred thousand dollars, bringing the total contributions by Korea to over 2.8 million dollars at present.

The DG (EAP) Mr. Aamer Ahmed Atozai expressed his gratitude to the Ambassador and the Representative of K-Water for the generous donation and that this donation will bring much needed relief to the flood affectees.