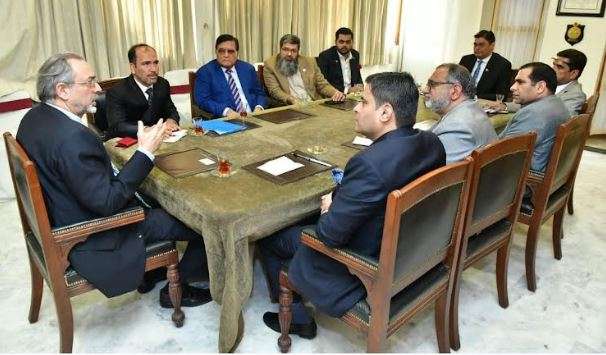 Islamabad, OCT 25 /DNA/ – Turkiye wants to increase bilateral trade with Pakistan to at least US$ 5 billion in the next 2-3 years as both countries have good potential to further enhance two-way trade volume in many items. This was said by Mehmet Pacaci, Ambassador of Turkiye while talking to a delegation of Islamabad Chamber of Commerce & Industry that called on him in his office led by Ahsan Zafar Bakhtawari President. Nurettin Demir, Commercial Counsellor of Turkiye Embassy was also present at the occasion.

The envoy appreciated the initiative of ICCI for organizing an International Housing Expo in collaboration with the Ministry of Housing & Works and assured that Turkish companies in Pakistan shall participate in the Expo whereas the companies and dignitaries from Turkiye would also be encouraged to join the Expo. Talking about trade through roads and railways, he said that Pakistan should upgrade its railways system to make it compatible with the railways system of Turkiye in order to promote bilateral trade through railways cargo. He said that trade through the road network can be cheaper due to low oil prices in Iran. He proposed to form a Committee comprising representatives of all stakeholders from both sides to discuss options and modalities for trade promotion through railways and roads links. He said that Turkiye is manufacturing electric vehicles and it can cooperate with Pakistan in this sector.

Speaking at the occasion, Ahsan Zafar Bakhtawari, President, Islamabad Chamber of Commerce & Industry said that despite very cordial relations. Pak-Turkiye bilateral trade is less than US$ 1 billion, which is not encouraging and both countries should facilitate their private sectors to improve it. He said that cargo shipment takes more than 30 days between Pakistan and Turkey and stressed the development of efficient road and railway links to reduce the transportation time. He said that ICCI in collaboration with the Ministry of Housing & Works would organize an international level Housing Expo in Islamabad in December this year and the Embassy should cooperate in inviting investors of the low cost housing sector from Turkiye to participate in the Expo. He said that ICCI intends to organize a Pak-Turk Business Forum in Islamabad to bring Pakistani and Turkish companies at one platform for B2B meetings in order to develop business links in the areas of interest and said that Turkiye embassy should cooperate in inviting Head of MUSAID as a Chief Guest for the event.

Azhar ul Islam Zafar, Vice President ICCI said that Turkiye has good expertise in construction field and it should cooperate with Pakistan in this sector.