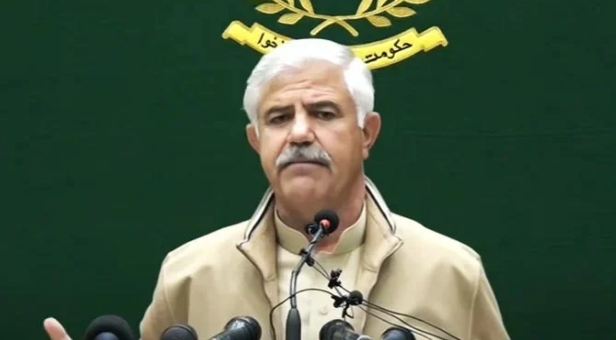 PESHAWAR: Khyber Pakhtunkhwa Chief Minister Mahmood Khan Tuesday said that he will sign the summary for the dissolution of the provincial assembly by tonight.

Speaking during the 86th meeting of the provincial cabinet, CM Mahmood said that he will send the summary for the dissolution of the assembly today.

“The last four years were very pleasant and I thank all the members, government and opposition members and bureaucracy,” said the KP chief minister.

Mahmood said that his party will form the government by winning two-thirds of the majority in the general elections.

He blamed the incumbent government for the instability in the country, saying that getting rid of the “corrupt group” has become indispensable.

KP Minister for Elementary and Secondary Education Shahram Khan Tarakai, addressing a press conference after the meeting, said that no one opposed the dissolution of the assembly.

Dissolution of KP assembly to lead to general polls

“The federal government will be sent packing in the next two weeks,” said the PTI leader, adding that the real issue is the political crisis and not the economy.

‘KP CM asked to file no-trust move against him’

On the other hand, Leader of the Opposition in Khyber Pakhtunkhwa Assembly Akram Khan Durrani alleged that CM Mahmood, through a close associate, asked him to file a no-confidence motion against him in a bid to stop the assembly from dissolving.

Durrani said that three of the ministers have spoken to his aide regarding this matter. The people pray for the end of this government’s tenure as there is inflation and corruption, he added.

Last week, Punjab CM Parvez Elahi had sent the summary to the governor, Baligh Ur Rehman, for the Punjab Assembly’s dissolution last week. However, Rehman refused to sign it, and the legislative was automatically dissolved.

The PTI chairman had announced the dissolution of the assemblies — Khyber Pakhtunkhwa and Punjab — in November last year. However, the plans were delayed due to consultations with allies and countermeasures adopted by the ruling allies in the centre.

The Pakistan Democratic Movement (PDM) had been repeatedly calling on the PTI to dissolve the assemblies since its announcement, and it seems that it is also gearing up for elections now.

But just like there were hurdles or reservations in Punjab, a majority of PTI lawmakers in KP are also not in favour of the dissolution of the provincial assembly and losing their stable government, according to The News.

“I don’t know who has advised the party Chairman Imran Khan but it’s not a wise decision. It’s neither in the interests of the party nor in favour of the province,” a minister, who wished to remain anonymous, told The News.

“The PTI has a stable government in KP and it should have been allowed to continue till the general elections in the country,” the ruling party’s minister told the publication.