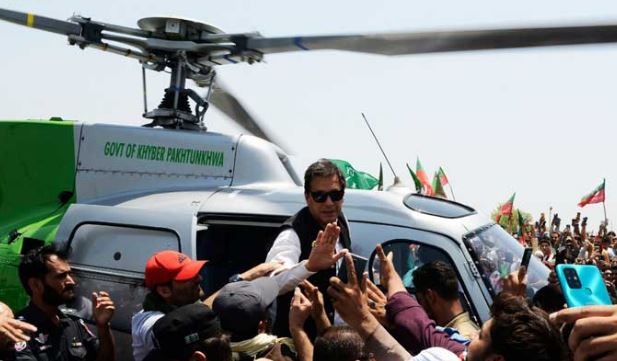 PESHAWAR: Khyber Pakhtunkhwa’s government has prepared a draft to amend laws regarding the use of its helicopter and other matters in the province.

Following the amendment, no one will be able to question the chopper’s use including who uses it and why is it being used.

According to the amendment draft, the use of government’s helicopter from November 2008 till date will be considered legal and valid. No question can be raised regarding the use of the chopper, which will be allowed to use for personal purposes on rent.

However, permission for personal use will have to be sought from the province’s chief minister.

The draft states that the government’s helicopter, apart from its use by the chief minister, can also be used by ministers, advisors, special assistants or government officials.

The use of KP government’s helicopter has remained notorious with PTI Chairman Imran Khan often using it to travel for personal use or to commute to party’s rallies and gatherings.

After the National Accountability Bureau (NB) submitted a list of 1,800 defaulters and unauthorised users of the KP’s helicopter against rules — including Khan, the Public Accounts Committee directed the bureau to make immediate recoveries from all unauthorised users in the list.

According to the list, Khan used KP’s official chopper to travel 137 times, the cost of which was Rs55.5 million and Rs66.9 million, as per official and commercial rates, respectively.

On another instance, KP’s Chief Minister Mahmood Khan and other ministers were charged by Charsadda’s district monitoring officer for misusing the official helicopter and resources of the state for Khan’s rally, who was one of the candidates in the by-polls.

A draft has also been prepared to make further amendments to the law regarding ministers’ salaries, allowances and benefits.

The government is expected to approve amendment to the act after including it as an agenda for the assembly’s session.

It should be noted that Khan, in the past, has been reprimanded for his personal use of government’s helicopter even while he was in office as the prime minister. He was summoned by NAB for allegedly using KP’s helicopters, while a probe was also carried out by the anti-graft body in this regard.